Carrying a number of devices will stretch your pockets, so manufacturers have begun incorporating devices into single gadgets. Korean firm Digix is the latest and has created the multi-function Picto DigiArt i90. 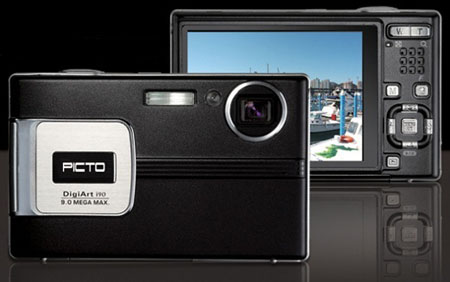 Digix's i90: camera, camcorder, MP3 player and a dictaphone

The i90 is mainly sports a seven-megapixel CMOS sensor and 3x optical zoom inside a stylish 17.5mm-thick body, which looks deceptively similar to Fuji’s FinePix Z100fd. The camera captures MPEG 4 video at 30 frames per second and at a resolution of 740 x 480. The 3in LCD display means videos can be watched immediately after they’re shot. Standard digicam features, such as face recognition and anti-shake technology, are included too.

However, the i90 also functions as an MP3 player and the 1GB SD card that’s bundled with the camera will get you up and running with plenty of music. The incorporated voice recorder should make sure you remember all the daily chores too, like stopping off to buy milk on the way home from a snap session.