Make it up you could not

The University of Michigan (UM) is pleased to announce that it has been awarded $10m by the US Army to carry out research leading to a "six-inch robotic spy plane modelled after a bat", which would "gather data from sights, sounds and" - worryingly - "smells". 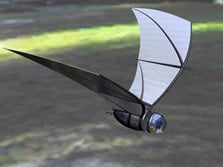 The university has used the army cash to found a Centre for Objective Microelectronics and Biomimetic Advanced Technology, or COM-BAT - a clear case of Media Targeted Acronym Related Titling, or Media-TART syndrome.

According to the uni press release:

U-M researchers will focus on the microelectronics. They will develop sensors, communication tools and batteries for this micro-aerial vehicle that's been dubbed "the bat".

Engineers envision tiny cameras for stereo vision, an array of mini microphones that could home in on sounds from different directions, and small detectors for nuclear radiation and poisonous gases.

Low-power miniaturized radar and a very sensitive navigation system would help the bat find its way at night. Energy scavenging from solar, wind, vibration and other sources [blood of living victims? Hanging upside down from power cables?] would recharge the bat's lithium battery. The aircraft would use radio to send signals back to troops.

And that's not all. It seems "the bat" might "perch at a street corner or building for longer assignments and send back reports of activity" - a capability which might be referred to, we suggest, as "gargoyle mode".

The COM-BAT guys have also produced this concept pic of "the bat" in action, which seems to suggest that the droid spybird will not be a boring old plane, helicopter, ducted-fan saucer/dalek/imperial-probe job or anything so conventional. Rather, the UM team seems to feel that robo-ornithopter is the natural way to go. (Though they don't have to make good on that; they aren't doing the propulsion.)

One might ask whether the US Army really truly needs another spyfly, cool as the notion of a vibration-harvesting ornithopter gargoyle bat-bot might be. But in fact this seems to be more in the nature of research seed money, rather than a real system. The UM crowd hopes to use the military cash to develop super-efficient "quantum dot solar cells", extra-accurate navigation modules, miniaturised sensor tech, etc.

Which is all nice to have. If not quite as nice as a bat-format robogargothopter. ®