Dextre, the mighty tonne-and-a-half space robot intended for repair and servicing tasks at the International Space Station (ISS), is now fully operational, according to reports. The 12-foot-tall mechanical maintenance man, a product of cutting-edge Canadian space robotics tech, has been fully assembled and is ready for work. 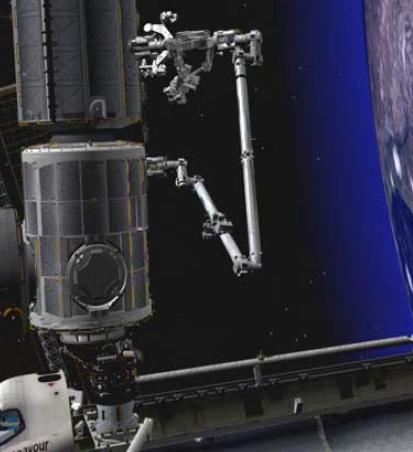 What Canada is renowned for.

The assembly was led by spacesuited extra-vehicular activity expert (and fully-qualified veterinarian) Dr Richard Linnehan, assisted by space-rookie Robert Behnken. Linnehan reportedly described the view during the operation of mighty Mother Earth in all her glory, rolling majestically beneath the gleaming white spaceships against the infinite starry void, as "pretty awesome".

Now that Dextre is up and running, Linnehan may have to return to being a vet. It seems that the Canadian droid will pretty much eliminate the need for spacewalking astronauts, as it can carry out almost any task a human can. Typical jobs, according to NASA, might include changing batteries or other parts in modules and "payloads" attached to the space station. The mechanoid is apparently designed for "high precision and a gentle touch", though it can also heave the likes of two-hundred-pound power units about with ease.

Dextre will normally move about the exterior of the station on the end of the enormous articulated "Canadarm2" gantry, also a Canadian product. If necessary the machine can "ride independently" on its mobile base system. NASA says that Canada was the natural choice to provide all this machinery, as America's northern neighbour is "renowned for its expertise in space robotics".

Dextre, Canadarm2 and the Mobile Base can all be operated by groundside controllers, thus freeing up space station astronauts to carry out other tasks inside. The main purpose of the ISS was to carry out human space operations, so it does seem curious in some ways that in fact - even when there are astronauts right there to hand - it still turns out to be safer and more efficient to use robots controlled from Earth. ®

Residents in westernmost municipality of Solund praise new mobile coverage, but others have been left behind
Networks1 Dec 2022 |

But why Elon Musk's satellite broadband biz and not govt-funded OneWeb?
Networks1 Dec 2022 | 12

Why not recruit mature folk from outside industry? Why not keep experience in place for longer
Offbeat1 Dec 2022 | 65