Hackers have been caught using a malicious scripting scam in an apparent attempt to boost their rating on eBay.

An auction for a 4WD car on eBay.co.uk featuring the ruse was brought to our attention by Reg reader John early on Monday. eBay pulled the auction on Monday afternoon but The Reg has this screenshot. 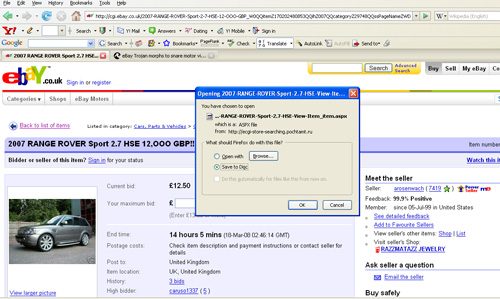 The auction for a 2007 Range Rover Sport HSE offered a car valued at £40K for £12K. Clicking on the auction generated a suspicious pop-up, served up from Russia. Having established something was amiss we called up security experts at Sophos to analyse the attack, which we initially took to be a scripting variant of the Bayrob Trojan scam.

Sophos established that surfers who click on the dodgy listing see a regular item page along with an embedded tag pointing to a Shockwave file. This Shockwave file redirects the user to an .aspx page in Russia. At the root of the page are two other similar .aspx pages - linking to other (already completed) vehicle auctions. ASPX is an html file format used to create Webforms.

The approach may have been used to harvest email addresses, or more likely as a way for dodgy sellers to give themselves a better reputation. Following the removal of the auction it's hard to be certain, but Sophos was able to make an educated guess about the purpose of the ruse.

Fraser Howard, a principal virus researcher at Sophos, concludes: "The scam appears to be hiding behind several other eBay sellers to piggyback on their reputations. The main listing itself (on the eBay site) is using a seller normally associated with online jewellery sales, a power seller. When you click through the the details page, and get redirected to the .aspx page on the .ru site, the seller is different again."

Sophos plans to add detection for the dodgy Shockwave file as the ReDir-A Trojan with its next update. ®

In brief Also, Another red team tool at risk of turning to the darkside, and Meta catches the US military behaving badly
CSO25 Nov 2022 | 85