The BBC Model B was markedly more sophisticated than its early rivals, thanks to its capabilities, powerful version of the Basic language, port array and full-size keyboard. But the BBC logo carried a lot of weight with purchasing parents hoping the machine would prove more educational to their offspring than a source of entertainment. 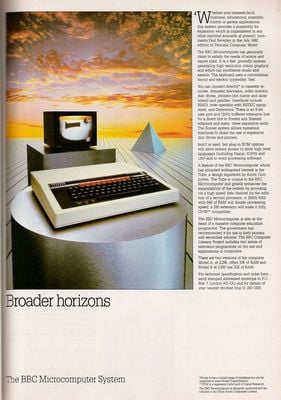 Those of us with folks who couldn't see it - or couldn't afford it - got Sinclair ZX-81s or Spectrums, Commodore Vic-20s or C-64s, or Dragon 32s for Christmas instead.

Both BBC Micros were powered by a CMOS 6502A processor clocked at 2MHz. Later models used the 6512A at the same clock frequency. The units had a modulator to allow them to be connected to a TV, though the Model B also had an RGB monitor port - the machine was often seen in UK schools sat beneath a Microvitec Cub monitor.

The computers used cassette tapes for storage - as all other home computers of the time did - but Acorn offered an optional floppy drive adaptor, and the truly wealthy could purchase a hard drive adaptor, connectable to a choice of 5MB, 10MB and 20MB drives.

Ah, those were the days... when my-computer-is-better-than-your-computer fights were far more interesting than they are today. Taking the mickey out of Apple fanboys? How tough is that?

Acorn revamped the Model B as the B+64 in mid-1985, taking the memory to 64KB and adding the aforementioned 6512A CPU. It was followed by the 128KB B+128, but this was overshadowed in February 1986 by the introduction of the chunkier BBC Master, which also contained 128KB of memory and was the start of a line that ran for three more years, until 1989 when it was effectively superseded by the Acorn Archimedes, which had been launched in 1987.