The famous V-22 "Osprey" tiltrotor plane-chopper combo is back in the news again for unhappy reasons, mere months after it had seemed to be finally putting its troubles behind it.

A US project official has revealed to the press that the Osprey's engines are currently wearing out much too fast, to the point where it may need to be fitted with different powerplants. The engine snag comes as Boeing, makers of the V-22, are hoping to sell it to the Royal Navy under a rather unfortunate name. 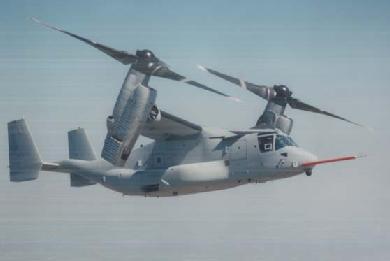 The TOSS chopper flies, could be undone.

Colonel Matt Mulhern, V-22 programme manager, told reporters at a naval expo this week about the wear issue on the Osprey's AE1107C "Liberty" turboshafts. It seems that the lifetime predicted by makers Rolls Royce (the UK firm bought Allison, the American firm which developed the engines, in the 1990s) was never regarded as being all that credible - and this view has now been confirmed. The US forces "could go as far as re-engining the airframe", according to the Colonel.

Rolls don't get to walk away from the issue sniggering to themselves, however, as they supplied the AE1107C under a "power by the hour" agreement. This should mean that units wearing out too fast loses them money, though it will also cause cost and downtime issues for the customers - the US Marines and Special-Ops command.

The Osprey programme has enough momentum behind it that even this latest hitch probably won't prevent the next order for 167 more aircraft being signed. The Marines in particular have to a large extent set themselves up around the V-22 and its unique capabilities. So much money and time has been sunk into it that the jarheads* will surely choose to pay whatever it costs in order to finally become the world's first tiltrotor force. The first frontline V-22 squadron is currently serving in Iraq, apparently without problems.

Meanwhile, Boeing have a plan to sell the V-22 to the Royal Navy. Rather than hauling troops in and out of combat, the idea here is to have the machines carry the British fleet's airborne radar. Ever since the Falklands - where the lack of a flying radar was a major factor in the UK taskforce's heavy losses to Argentine air attack - the RN has struggled along with an unsatisfactory helicopter-mounted solution. (Helicopters can't get as high or stay up as long as ordinary planes, and an airborne radar needs both height and endurance.)

Britain's new aircraft carriers, though easily big enough, will not be equipped to launch and recover regular fixed-wing planes. This is so as to save money. Unfortunately, it means that Blighty must buy exceedingly complex and expensive aircraft to fly from the ships, such as the new F-35B supersonic stealth jumpjet. And the RN, needing to replace its current, aged radar Sea Kings, would probably rather have Ospreys than another unsatisfactory helicopter. (They'd probably really rather have a much better E-2D Hawkeye carrier-radar plane for a fraction of the price, but the decision to buy slightly cheaper carriers rules that out.)

Apart from the fact that the MoD hasn't got any money, the biggest obstacle to the radar Osprey would seem to be its name - Tactical Organic Sensing System (TOSS). It seems that Boeing have realised that this has unfortunate connotations in English, and would like to change the name**, but TOSS "has acquired a life of its own".

Which would surely be a concern for any owner-operator. ®

*The US Marines are so called owing to their dislike of having hair on the sides of their heads.