I've been to some strange events in my time reporting for El Reg. But yesterday at the London School of Economics I saw one of the most disturbing of all. If you thought people don't behave in real life like they do online, think again. Here were all the most unpleasant aspects of online behaviour - ignorance, rudeness, groupthink, and a general sneering moral superiority - but made flesh. By the end, it had degenerated into farce. So what was it all about?

The event was billed as "Music, fans and online copyright", and hosted in co-operation with the British Berkman clone, the Oxford Internet Institute.

Music and copyright are subjects that everyone has a stake in. But the speakers had been hand-picked by a fanatical anti-copyright Jacobin, Ian Brown. Brown drew from a narrow, ideologically homogenous group of friends. That didn't make for an enlightening debate, but it made for a good lynching party - and the afternoon would culminate in a ritual lynching, with Mr John Kennedy of IFPI lined up for the noose.

With a selection like this, unpleasantness was guaranteed. But before I describe the culmination of the day, let me describe a few of the preceding speakers.

Michelle Childs is the European end of Knowledge Ecology International, as Jamie Love's CPTech is now called. It does very good work watching Big Pharma, and looks for opportunities to use the international IP system to enable cheaper drugs, for example. This is the sort of activism that leads to lives being saved.

Now here's a funny thing. Eight years ago, Love was part of the Blur/Banff Workshops, which led to some proposals for copyright reform with the same name. These advocated a collective licence - so Joe Public could get his free music, and artists could be paid.

But Michelle must be new to all this, for she didn't mention Blur/Banff once. She had lots of slides about DRM - which now seems as distant as black and white TV.

Childs feared a "wealth transfer from consumers to intermediaries". It's hard to see what the real "wealth transfer" is when there's so much stuff to be picked up for free (I hope I haven't Pirate Bay'd my bandwidth cap this month - it saves me a bleedin' fortune! [joke]). But the implication is clear. Because we don't have to pay for anything anymore, we're being robbed blind.

(In her Powerpoint she cited "Radiohead and mash-ups" under the heading "reasons to be cheerful". Radiohead: a reason to be cheerful? I'm not joking. I don't think she was either.)

Next up was a gangly Cambridge graduate called Rufus Pollock. Rufus, I guessed, had not spent his gap year getting clap in Pattaya, but reading Lawrence Lessig books instead. As with most of the audience at the LSE's Old Theatre, this had nurtured a fierce sense of injustice against creators. So despite a non-functioning computer, he stormed into a bedsit rant of great righteousness. Here's a verbatim excerpt:

"There's another crucial point that gets lost in this debate here. There's also a loss, right? I mean, people keep talking about transfers and balance. The crucial thing - and I know maybe this is one insight economics has - is that every time we use a monopoly such as copyright we're basically taking out £20 notes and burning them. That is what we do. Right? We are burning that stuff. We are burrrrnning. Right?"

Flapping his arms about and pacing the stage to express his tension (which frequently took him out of microphone range) Rufus thought copyright lasted far too long. But because he was a good academic - "I'm a good academic", he told us - he needed more data. So he could disprove that copyright shouldn't last for 25,000 years, for example. 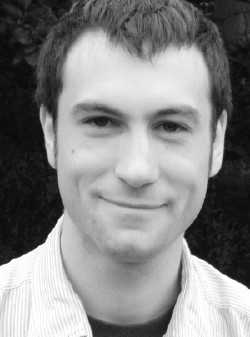 This was Dave Spart trying to motivate Citizen Smith. Rufus sounded completely out of his tree, too, like a bloke after several pints, and then a lot of medication. (You think I'm being uncharitable, but I'm not - audio to follow.)

As Rufus might reply to Rufus: "I mean, the trouble is, right, there's no money coming into this system. I mean, unless there is, we can't talk about burning £20 notes. Because they're not there, right?"

Pub at 8, Revolution at 9. Rufus is on board of the Open Rights Group.

The voice of the artist?

At long last, and it was nearing 4pm, there was the voice of the artist we'd been promised. I had high hopes the "freetards" had found somebody really famous, who could without fear, rip up the rule book. This would make writing my headline easier. Who could it be? Maybe Trent Reznor. Or David Bowie. Or Dave from Blur?

But no, the freetards' artist turned out to be none other than tech writer, Wendy Grossman. As she said herself, she hadn't released a record in almost 30 years. And even back then, she added disarmingly, her Dad had described her career as "really more of a hobby". Wendy knew her folk folklore, and reeled off a long litany of tales of injustice from the folk scene.

But folkies don't get rich, appear in the charts, or get told to go to rehab, no, no no. It's an uncommercial corner of music, one that's indifferent to fashion or commercial concern, and one that will go on forever - or as long as we can attach a string to a stick. And we didn't need Wendy to tell us that. No, no, no.

The choice still puzzles me. Why choose an artist from the most non-commercial genre imaginable? Folk comes from an oral tradition, and (as Wendy said) great care is taken in passing on songs orally. It's surprising to me - and a testament to the health and depth of the recording business - that any folk music ever gets recorded at all. (Of course it does - and if you're on eMusic, get yourself to Smithsonian Folkways.)

But if you wanted a perspective on the threats and opportunities to a successful contemporary artists, you wouldn't have been any wiser - Brown really couldn't have made a more inappropriate choice. This was either an oversight, or it was by design.

I used to play amateur cricket - very amateur cricket - 20 years ago. Does this mean I'm in qualified to speak on panels about the challenges facing professional cricketers today? By this logic, I am. Move over, Freddie Flintoff!

(Wendy is on the Advisory Board of the ORG.)

Next page: The great debate
Page:

Heat shield will be put to the test for the first time, what could go wrong?
Science3 Dec 2022 | 5