But there can be only one

What do the data storage firm NetApp and the internationally —er— recognized war profiteer Halliburton have in common?

Last month, Network Appliance officially nick-ed its name to NetApp. It also snagged a new corporate logo and slogan in a marketing push to be more easily recognized as a brand. Turns out there's four or five people out there with the means, need, experience and interest in purchasing data center storage systems that haven't heard of NetApp. That's where a multi-million dollar image overhaul comes in.

And because it was purely an exercise in brand distinction, we couldn't help but point out that the generic stylized new "N" logo is also trademarked by the Dutch automotive lube company, Novatio.

But there's also the new slogan: "Go further, faster." It's not a terrible slogan, we'll admit right here. After all, the key to a good corporate motto is that it sounds important, while not really meaning anything. Full marks.

There's a hitch, of course. "Go further, faster," is also a trademarked slogan of none other than Halliburton. Yes, know it, love it — give it billion dollar no-bid government contracts: Halliburton. Hmm, Novatio and Halliburton. Maybe NetApp's marketing people did an internet search on "Oil" and took the company revamp from there.

Halliburton, by the way uses "Go further, faster," for its "Halliburton Young Professionals" campaign to send kids to Iraq in style.

So take a look at Halliburton's pitch, then NetApp's. It's a tough choice. On one hand, according to the Halliburton recruitment video, the company makes a habit of going further, faster every god damn day. That's consistency. On the other, NetApp's video has a 4/5 star rating on YouTube.

"Very cool!" says a commenter who we are sure is not an employee of NetApp. "Awesome," echoes another completely random observer.

Which pitch better tickles your fancy? Check out both videos below. It's decision 2008 time: 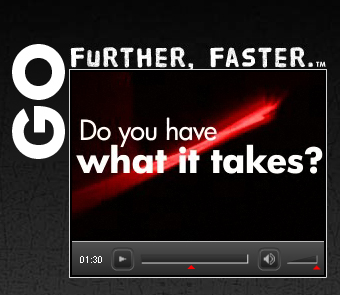 Come on you apes, do you want to live forever 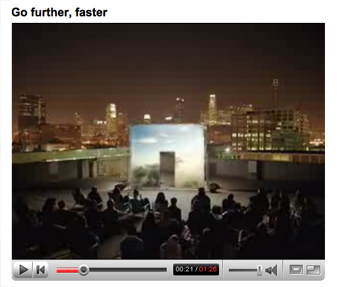