The Baying of the Hounds

Headspace: How the state is leading us by the nose

Book extract Today marks the publication of Headspace - Reg contributor Amber Marks's exploration of how the state and private sectors are trying to exploit the science of smell to watch and control citizens.

Over the coming weeks, we will be publishing exclusive extracts from the book, which is published by Virgin Books and available here.

Today we present Chapter 1 "The Baying of the Hounds":

The first time I was sniffed by a dog I was seven. I entered a room full of grown ups and someone's dog headed straight for my crotch, stuck its nose up between my legs and sniffed. It then wrapped its paws around my leg and started to hump me so hard I fell to the floor. It was my first sexual experience. It was un-consensual and took me by surprise. I blamed myself. 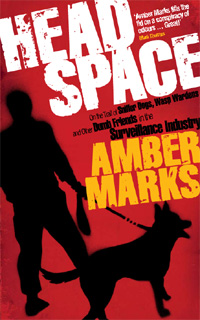 Smell has historical associations with sin, which may be why the experience of being sniffed is unnerving. Patrick Süskind sums up its invasiveness in his novel about a freak of nature called Grenouille who hunts down his victims by their scent and murders them to preserve their human essence for his personal perfume collection. The novel begins when Grenouille is a baby. A priest is cradling Grenouille in his arms, when he wrinkles his little nose:

It was establishing his scent! And all at once he felt as if he stank ... The child seemed to be smelling right through his skin, into his innards. His most tender emotions, his filthiest thoughts lay exposed to that greedy little nose...

The first time the police dog penetrated my consciousness was when I was working as a barrister in connection with a liquor licensing application. It was traditional for licensing sessions to begin with an address to the magistrates by a representative of the area's police force on its latest initiatives. I was sitting on the bench waiting for the officer to finish before I could make my application.

"We will be taking police sniffer dogs around pubs and clubs in the area to detect drug users on the premises," he stated proudly.

The announcement of this initiative surprised and unnerved me. The 'British Pub' would take on a different character with police dogs sniffing around the feet of those relaxing with friends after a night of debauchery. Had dope smokers lost the right to drink? I made a note to research this initiative.

I might have forgotten this incident had further encounters not swiftly followed.

Walking into Fulham Broadway underground station, I saw officers holding dogs on leashes, encouraging them to sniff the crotches of passing commuters. I approached one of the policemen and asked him what was the purpose of this operation.

Luckily, I was wearing a suit and I apologised for my curiosity, explaining that I was a lawyer with a professional interest in crime. He looked at me with something approaching interest.

"Well, you know that most crime is caused by drugs?"

Artificial affinity had been achieved.