Cassini performed an "in your face" flypast of the Moon on 12 March, skimming at over 51,000km/h (32,000mph) to within 50km (30 miles) of the surface. During the encounter, it skirted the "geysers" spewing what scientists suspected was water vapour and other material at an altitude of 200km (120 miles) for a quick "sniff and taste" of their composition.

The results have come as quite a surprise, as Hunter Waite, principal investigator for the Cassini Ion and Neutral Mass Spectrometer at the Southwest Research Institute in San Antonio, explained: "A completely unexpected surprise is that the chemistry of Enceladus, what's coming out from inside, resembles that of a comet. To have primordial material coming out from inside a Saturn moon raises many questions on the formation of the Saturn system.

Proof of Enceladus's internal heating was provided by Cassini's Composite Infrared Spectrometer, which captured an image of the "tiger stripe" fissures which are the source of the geysers - indicated by the yellow stars: 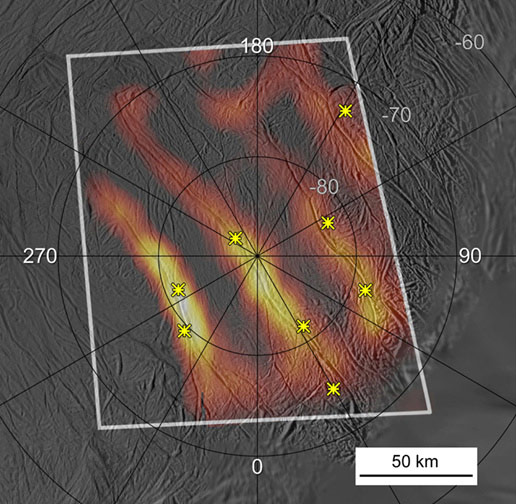 NASA explains that the fissures are "warm along almost their entire lengths", elaborating: "These more precise new measurements reveal temperatures of at least -93°C (-135°F). That is 17°C (63°F) warmer than previously seen and 93°C (200°F) warmer than other regions of the moon. The warmest regions along the tiger stripes correspond to two of the jet locations seen in [previous] Cassini images."

John Spencer, Cassini scientist on the Composite Infrared Spectrometer team at the Southwest Research Institute in Boulder, Colorado, enthused: "These spectacular new data will really help us understand what powers the geysers. The surprisingly high temperatures make it more likely that there's liquid water not far below the surface."

Dennis Matson, Cassini project scientist at NASA's Jet Propulsion Laboratory in Pasadena, California, concluded: "Enceladus has got warmth, water, and organic chemicals, some of the essential building blocks needed for life. We have quite a recipe for life on our hands, but we have yet to find the final ingredient, liquid water, but Enceladus is only whetting our appetites for more."

Cassini is scheduled to make three further flybys of Enceldaus this year - the next in August - and while the spacecraft's prime mission to probe Saturn and its environs ends in June, the agency has hinted at "a proposed extended mission would include seven more Enceladus flybys". ®