Mishandled data phones home - 'I fell off the truck'

Fujifilm Recording Media has launched in the US a GPS tracking device for tape storage — the backup and archiving medium with a nasty habit of "disappearing" while in transit to remote sites.

Fujifilm Tape Tracker is a wireless device that discreetly fits into a standard half-inch tape cartridge. The company partnered with cargo monitoring firm SC-Integrity (SCI) to develop software to monitors the Fuji-bugged tapes as they move between data centers or disaster recovery locations. Data center admins can use a web-based application to find the device using maps and satellite images. 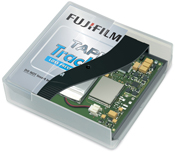 Tape Tracker is based on LoJack InTransit, a system SCI developed with LoJack in 2006. According to Fujifilm, the software can set boundaries that will send alerts if the cargo strays from its route. The service also provides chain of custody history reports and 24/7 monitoring.

The cost of using Fujifilm's digital snitch costs $150 per month through the company's resellers.

Fujifilm hopes to capitalize on tape archiving data breach scares that pop up on a disturbingly consistent basis. Most recently, US retailer J.C. Penny had a backup tape allegedly stolen that included personal information belonging to more than 650,000 customers. ®

Customers 'becoming impatient' to get 'clarity' on the matter, says exec
Systems6 Jul 2022 |

Stop us if you've heard this before: Apple facing charges of anti-competitive behavior in the App Store
Legal6 Jul 2022 | 10

Time to bone up on Hancom Office, the productivity suite that's big in Korea – and nowhere else
Software6 Jul 2022 | 9