A Cuneiform clay tablet which for over 150 years defied attempts at interpretation has now been revealed to describe an asteroid impact which in 3123 BC hit Köfels, Austria, leaving in its wake a trail of destruction which may acccount for the biblical tale of Sodom and Gomorrah. 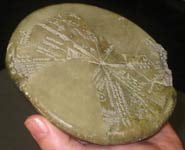 The "Planisphere" tablet (see pic) - inscribed around 700 BC - was unearthed by Henry Layard in the remains of the library of the Assyrian royal palace at Nineveh, close to modern-day Mosul, Iraq. It's a copy of the night diary of a Sumerian astronomer containing drawings of constellations and "known constellation names", but it required modern computer tech to finally unravel its exact meaning.

Alan Bond, Managing Director of Reaction Engines Ltd and Mark Hempsell, Senior Lecturer in Astronautics at Bristol University, subjected the Planisphere to a programme which "can simulate trajectories and reconstruct the night sky thousands of years ago". They discovered that it described "events in the sky before dawn on the 29 June 3123 BC", with half of it noting "planet positions and cloud cover, the same as any other night".

The other half, however, records an object "large enough for its shape to be noted even though it is still in space" and tracks its trajectory relative to the stars, which "to an error better than one degree is consistent with an impact at Köfels".

That a large body had impacted at Köfels had long been suspected, the evidence being a giant landslide 500m thick and five kilometres in diameter. The site had no impact crater to back the theory, but the researchers now believe they have a plausible explanation for that.

The Bristol Uni press release explains: "The observation suggests the asteroid is over a kilometre in diameter and the original orbit about the Sun was an Aten type, a class of asteroid that orbit close to the earth, that is resonant with the Earth’s orbit. This trajectory explains why there is no crater at Köfels.

"The in coming angle was very low (six degrees) and means the asteroid clipped a mountain called Gamskogel above the town of Längenfeld, 11 kilometres from Köfels, and this caused the asteroid to explode before it reached its final impact point.

"As it travelled down the valley it became a fireball, around five kilometres in diameter (the size of the landslide). When it hit Köfels it created enormous pressures that pulverised the rock and caused the landslide but because it was no longer a solid object it did not create a classic impact crater."

Mark Hempsell, hinting at the possible fate of Sodom and Gomorrah, adds: “Another conclusion can be made from the trajectory. The back plume from the explosion (the mushroom cloud) would be bent over the Mediterranean Sea re-entering the atmosphere over the Levant, Sinai, and Northern Egypt.

“The ground heating though very short would be enough to ignite any flammable material - including human hair and clothes. It is probable more people died under the plume than in the Alps due to the impact blast.“

While the biblical fate of the legendary dens of vice (“Then the Lord rained down burning sulfur on Sodom and Gomorrah - from the Lord out of the heavens” - Genesis 19:24) sits nicely with the asteroid theory, it's never been categorically proven that they actually existed in their suspected location close to the Dead Sea.

Tales of fiery destruction raining from the skies are not, though, restricted to the Bible. Hempsall told the Times that "at least 20 ancient myths record devastation of the type and on the scale of the asteroid’s impact" - including the Ancient Greek myth of how Phaeton, son of Helios, lost control of his dad's chariot and plunged into the River Eridanus.

A translation of the Planisphere and the researchers' findings can be found in the book A Sumerian Observation of the Köfels' Impact Event. The tablet is object number K8538 in the British Museum collection. ®