Silly name aside, this is a quality camera

Review The curiously named Olympus µ1010 is also known as the mju 1010, which doesn’t make it any easier to pronounce. It comes in three groovy - or garish - colours, silver, black and metallic blue.

This is a pretty well-specified camera considering the price and target audience. There’s a beefy 7x 6.6-46.2mm optical zoom lens for starters, which is equivalent to a 37-260mm zoom on a 35mm camera. 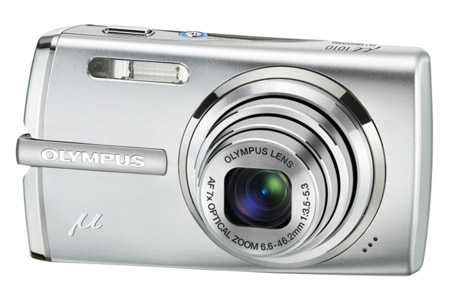 Olympus' µ1010: it even works underwater

The 1/2.33in CCD is a 10.1-megapixel chip, and you also get a twin image stabilisation system, face detection, special technology designed for low-light shooting and 23 scene modes. You can even use the µ1010 underwater, up to a depth of 40m, provided you’ve got an optional underwater case. And a good pair of lungs.

The µ1010 is a slim camera, measuring 99 x 56 x 25mm and weighing 135g without battery. It’s certainly very pocketable. At the front is the usual flash and lens arrangement, while on top is the shutter control and power button - which glows a nice blue colour when switched on. At the side is a flap for a mini USB port, while around the back is 2.7in LCD screen composed of 230,000 pixels. Nearby sits a zoom rocker bar, control dial for various modes, the menu button, a playback button and a four-way arrow pad for controlling macro, flash, timer and exposure compensation.

Below this is a display button and shadow adjust/delete button. Underneath is a spring-loaded cover for the battery and memory card. Incidentally, rather than use an SD card or Memory Stick, the µ1010 uses the xD-Picture card format.

US cop body cam maker says it won't ship face-recog tech in its kit? Due to ethics? Did we slip into a parallel universe?

Hands On Hardware nothing special, but AWS integration gets you up and running fast

Is line-of-sight gear good enough for this kind of work?

RoTM The bicycle's top left. I'm not an AI... you are. Stop hitting yourself