The major advancement in Sun's new CMT SPARC Enterprise T5140 and T5240 servers is that both systems support two processors — whereas previous offerings topped out at a single socket.

Each processor - part of the "Niagara" line - is equipped with up to eight cores and 64 threads, which is par with the chip's predecessors. But with a fresh ability to double-up, a single machine is able to process 128 instructional threads at the same time. Sun heralds the chip consolidation as leading to better performance per watt and space efficiency. 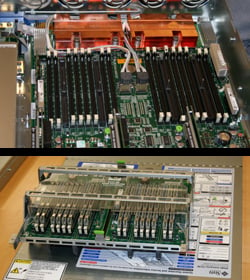 The company remains as the only major server vendor to use this type multi-core attack in the market.

"The big change for us is when we came to the realization that we could take processors in a different direction with a high thread count," said John Fowler, Sun's executive veep of systems at a press briefing. "We decided to take all our design teams, and instead of cranking the clock, we'd go multi-thread and multi-core."

Sun and Fujitsu issued some benchmarks for the systems, claiming the T5240 server with Solaris OS 10 could support 65,000 Lotus Notes users. By all accounts, that's a lot of noteage.

Sun is also expected to roll out a four-socket T5400 (Botaka) system in a not-too-distant future. ®