Symantec tools up with Xen for VMware assault

Symantec Vision '08 Symantec is teaming up with Citrix to attack the server virtualization market. The storage management firm has stirred Citrix's Xen code into its Veritas suite in a new offering arriving later in 2008.

"It's the first solution that solves the problem of managing storage for highly dynamic x86 virtual server environment," he said. 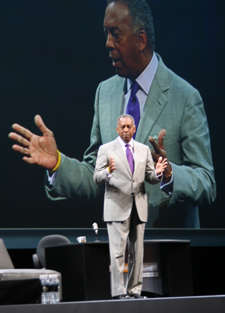 VVI basically puts Citrix's XenServer hypervisor into the Symantec Storage Foundation software administration interface. That's the opposite of what we were told a year ago to expect from the Xen/Symantec alliance.

VVI allows direct control of block storage from a guest virtual server. Soderbery claims this will make companies more willing to transition into a virtual environment.

Features from the XenServer side of things include sharing boot images across multiple virtual servers and load balancing.

Veritas Virtual Infrastructure is available this fall starting at $4,595 for a two-socket server. ®