NASA gets intimate with Phobos 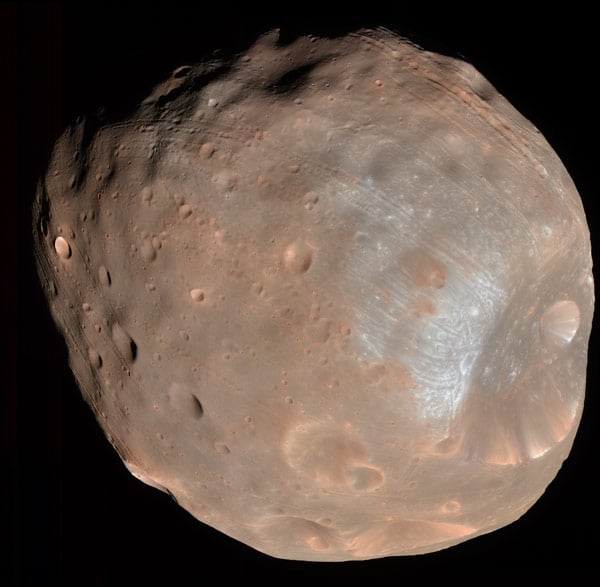 NASA explains that the above image (bigger version here) was taken "at a distance of about 6,800 kilometers (about 4,200 miles)", and is "presented in color by combining data from the camera's blue-green, red, and near-infrared channels".

NASA's press release adds: "The new view shows landslides along the walls of Stickney and other large craters: Phobos' striking surface grooves and crater chains; and craters hidden on the moon's dark side illuminated by 'Marsshine'."

Diminutive Phobos is, the New Scientist notes, ultimately doomed since it's "spiralling towards Mars at a rate of 1.8 metres per century". In around 50 million years it will crash into Mars - if the Red Planet's gravity doesn't pull it apart first.

In 2009, Russia will send a robot to the body, which is possibly a captured asteroid, with a view to returning samples to Earth.

NASA has more new pictures of Phobos, including a 3D view, here. ®

Top tip: Your RSA private key should not be copied from a public code tutorial
Research17 Aug 2022 | 21