Mastering the menu system only takes a few seconds and after that it's all pretty twit-proof. The screen itself is bright and clear, while the sizeable white out of black text makes reading the screen very easy no matter what the prevailing lighting conditions are.

File support extends to the usual MP3, WMA and AAC formats, though the absence of support for FLAC is a little odd in view of Sony's pitch being based on better-than-the-rest audio performance. Video playback is limited to MPEG 4 and H.264 files. 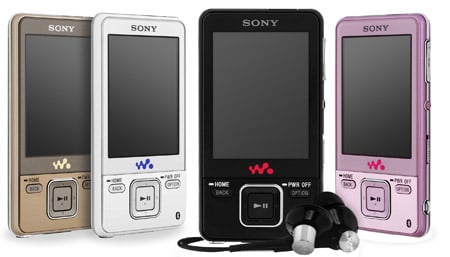 The eminently pocketable player is available in four fetching colours

Shorn of it's dependence on SonicStage, the process of moving media onto the Sony is a simple case of drag and drop using Windows Explorer or the bundled Sony MediaManager software. Alternatively, you can sync content and playlists using Windows Media Player. While Mac users are catered for, Linux users are not.

Rather oddly, Sony provides no video re-formatting software, but rather offers you the chance to upgrade the MediaManager package to a 'pro' version for $13 (£6), thereby enabling the video reformatting tool. This seems a small financial gain when set against the number of buyers whose nose this level of parsimony will get right up.

Video playback is supported up to 30f/s so once you have your content formatted is looks pretty decent. Sony supplies a little plastic clip-on stand that will prop your Walkman up at around 80° like a PMP, if you fancy doing some serious video watching.

Sony bundles both wired and Bluetooth 'phones. The wired earbud phones, with three sizes of rubber bud, are of a very high quality indeed, looking and sounding a lot like Sony's MDR-EX75SL earphones. Pretty much every other MP3/PMP maker could learn a thing or two from Sony on the subject of bundled earphones, quality thereof.

The Bluetooth headphones are Sony's DR-BT21G neckband variety and come with a hinged frame to ease storage when on the move. They sit both securely and comfortably on the ears when in use and weigh a not unreasonable 65g. The one front you would expect the Sony to shine is sound quality and they don't disappoint.