According to the bundled Diagnostic Tools utility, the 900 comes with just 4GB of storage, partitioned into 2.3GB and 1.5GB spaces, allowing for the formatting overhead. Fortunately, the Disk Utility app reveals the missing 16GB out of the 20GB the Linux-installed 900 comes with. We'd have preferred a single, flat storage space, or at least two partitions rather than three, and we suspect most computer and/or Linux novices will too. 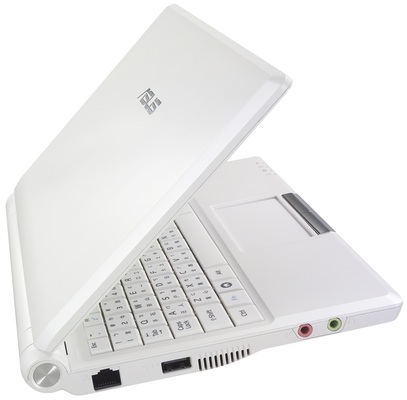 Now with 20GB of solid-state storage

There are two SSDs in the 900: the 4GB unit in the same place it's to be found in the 701. The 16GB unit is to be found in the expansion bay, accessed through the hatch in the base of the Eee. So if you're looking forward to Asus' promised 3G modem add-in, it's not going to fit into the 900's Mini PC slot unless you remove the 16GB SSD first.

And why not? Do we really need all that space? Saying so makes us feel like Bill Gates stating that 640KB is all the memory a PC will ever need, but the Eee ethos isn't about carrying vast quantities of data around with you. Heck, the 4GB model has room for Windows, Firefox, Thunderbird, OpenOffice, Fox Reader (a PDF viewer) and the IM app Pidgin, maybe with an SDHC card for data.

Still, it does mean there's more room for the files you do want to have with you at all times and frees up the memory card slot. There's now room for a heap of snaps if you're a photographer using the Eee to log pictures on a shoot. Buyers worried about Flash storage write longevity now have plenty of extra cells to take the strain when others fail. Not that this is really an issue with Flash any longer.

It's not all wall-to-wall improvements. Asus missed an opportunity to improve the 900's Linux GUI. There are plenty of customisation tools now available for tweaking the user interface, and Asus should have included at least one of them. Not everyone wants to pop into the command line and hack configuration files manually.

However, the Linux bundle remains solid, with all the key communications, productivity and media tools you need. A more recent version Skype is included, with webcam support. As before, if you need Windows apps - not all hardware add-ons are supported by Linux - you can install Windows XP easily. Or just buy the 900 Windows Edition.

Back to Linux: why does the 900's battery readout still not show how much charge is present when you're on mains? We like to know where the charging process has got to without having to yank the power cable.

And so on to the battery itself. We get around three-and-a-bit hours out of the 701's 5200mAh battery, and with the 900's higher-clocked CPU we were worried about the new machine's runtime. Then we looked at the power pack that came with the 900 and found it was only rated at 4400mAh - 15 per cent less than the capacity of the 701's battery.

Battery life was our only serious disappointment with the 701, and it remains the 900's chief fault. We ran our usual test: loop a standard-definition H.264 video until the battery dies. The volume was set to 50 per cent, the LED backlight brightness to 100 per cent and the wireless on and associated with an access point.