The 900 ran for just under two-and-a-quarter hours, enough for a full-length movie, but not a long plane journey. We estimate you'll get around three hours or so out of the 900 for general use, depending on your workload. That's no improvement on the 701, and not as poor as we'd expected considering the lower-capacity battery and the higher-clock CPU.

Incidentally, the 900 comes with a small brick-style AC adaptor - a step back, we feel, from the 701's similarly sized but more convenient phone-charger style power unit. The new adaptor weighs a little less than the 701 charger's 110g, but add the power plug and its cable, and overall the 900's mains link is the heavier of the two. Even if it wasn't, we'd still prefer the 701's adaptor.

Lastly, we come to price. What will the 900's bigger display, higher storage capacity and large-but-gimmicky touchpad cost you? The standard price is £329 - £110 more than Asus' asking price for the 701. That takes the 900, just out of the 'it's so cheap, why the heck not' band and past £299 into the 'maybe I should get a bigger, cheap laptop instead' zone.

Of course, the 900 isn't competing with dirt-cheap 15in notebooks - different horses, different courses - but a lot of consumers will compare the two. The decision's easy: do you want power for your 300-odd quid or a high degree of portability? You can't, for now, have both, so make your choice according to your computing needs. 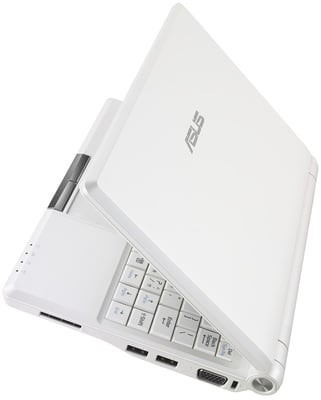 We'd would be happy to pay £329 for the 900's portability and storage capacity were it the only Eee available. But the 701's £220 price tag is irresistible, and we've grown accustomed to its small screen size. It has sufficient horsepower for this kind of machine.

Then there's Atom. Asus has promised an Atom-based Eee for late June. All other things being equal, it should at least give the Eee more performance and a longer battery life. For that, we'll wait.

The Eee PC 900 is all about ease of use and portability, so it's churlish to grumble about specifications. The little laptop ticks all the right boxes when it comes to features and performance. It's probably not going to replace your 15in workhouse notebook, but it might well become a favoured second laptop to take with you on your travels.

There's the extra storage space, of course, but the real benefit here is the bigger screen. It's both easier to read than the 701's and, because of the higher resolution, able to show more. The 900 isn't the revolution the 701 was - or, thanks to the higher price, as compelling. But with this model Asus got the form-factor down pat.

The Eee PC gains the screen size and storage capacity needed to make it fly - but loses its 'what the heck' price.
Price: £329 RRP
Page: