Build a 14.5 watt data center in a shoebox

All it takes is a buffalo and some courage

Those supercomputing guys love to build their massive data centers full of hardware and high-end cooling systems. They make you feel like a real man or at least a real geek, which is important.

As far as we can tell, your best bet for going small will rely on wares from Plat'Home and Buffalo Technology.

Plat'Home has pumped its tiny servers into the Japanese market for years. Recently, however, it became more ambitious, offering up some gear to North Americans.

The company's fancy MicroServers make even 1U boxes look like bloated giants which - like Britney Spears - are in desperate need of a rigorous training regimen. 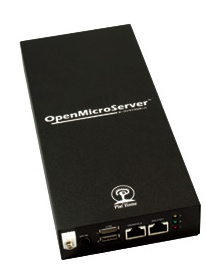 Witness the OpenMicroServer, which this week went on sale to North American folk. It's 9 inches by 4 inches by 1.3 inches. The system has built-in Power over Ethernet and can run fanless at up to 122°F over long periods of time. CRAC units need not apply. It also sports a pair of Gigabit Ethernet ports, a 100Mb port, a pair of USB ports and a pair of serial ports.

Okay, okay. We'll grant you that the system limps along on a single 400MHz (AMD/Raza) Alchemy MIPS chip. But we're after something spectacular and unique here. So, why not ignore the chip and embrace a box that reflects an entire cultural ethos?

"The OpenMicroServer has what we like to think of as very ‘Japanese characteristics,'" said Tomoyasu Suzuki, president of Plat'Home. "It doesn't stand out, and it doesn't complain. It just gets the job done. This 4th generation product - selling since 2001 - fits small and large companies that need reliability. Tuck it in the server room, set it up, and you can depend on it to keep doing its job." 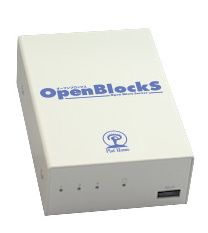 Those of you not tempted by the OpenMicroServer might want to check out the OpenBlockS line, which also ships in North America now.

The OpenBlockS 266 can run at up to 104°F and includes a CompactFlash slot that's DMA-ready. This unit relies on a 266MHz PowerPC chip, 128MB of memory and a pair of 10/100 Ethernet ports. You'll find all of the specifications here.

Plat'Home pitches this as a handy box for things like vending machines and is proud to point out that you can fit five of the devices on a single 19" rack slide, if needed. In addition, the company boasts that standard x86 boxes from the likes of Dell and HP will consume as much power as 76 of the OpenBlockS 266s, which needs just 4.5 watts.

And now onto the storage.