The fruits of subterfuge

In surreptitiously slipping Safari onto Windows by way of the Apple Updater, Steve Jobs and his minions have tripled the browser's market share.

Late last month, Apple debuted Safari version 3.1, and it immediately offered the new browser to Windows users via the software updater that accompanies iTunes and Quicktime. If offer is the right word.

The browser wasn't listed as a new program. It was listed as just another update - and the install button was checked by default: 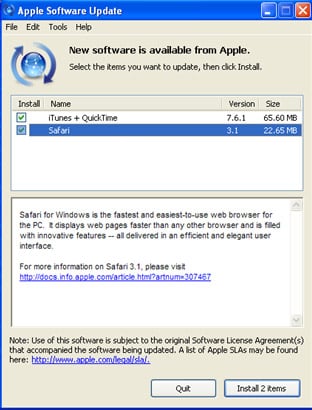 Well, it looks like the trick worked. According to the folks at Net Applications, Safari 3.1 has already tripled the peak Windows share nabbed by its predecessor, Safari 3.0.

That's still a ways behind Firefox - which commands a healthy 18 per cent share according to the research wonks at Forrester Research - but the big-wigs at Mozilla are still peeved at Apple's update trick.

CEO John Lilly has even accused Steve Jobs of compromising the security of the entire internet. "What Apple is doing now with their Apple Software Update on Windows is wrong," Lilly wrote on his personal blog. "It undermines the trust relationship great companies have with their customers, and that’s bad - not just for Apple, but for the security of the whole Web."

Sure, Jobs has updated his update trick. Apple Software Update now identifies Safari as new software. But the install button is still checked by default: 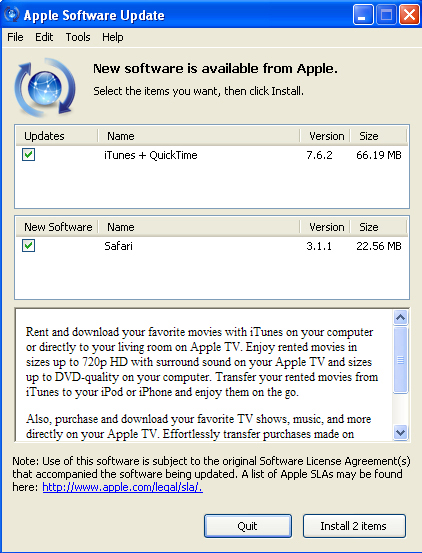 Mozilla thinks Jobs should update the update to his updater. "This is a good first step," director of community development Asa Dotzler recently blogged. "Now Apple needs to stop checking the box for 'New Software' items by default. With that change, I think I'd be pretty happy to let the Apple Software Update service back on my Windows machine." ®