During private and quieter moments, it does a person good to assess the present threat of robots.

Robots may betray you, shoot you, or even seduce and break your fragile human heart. But at least there's only a small fraction of a chance that a robot will eat you.

But hold that comfort close while you can. Some French scientists are working on exactly this.

A team of researchers have developed an artificial mouth that chews — for now — apple slices much like a human would. Complete with model teeth and artificial saliva.

In the study, Gaëlle Arvisenet and his team sought to create an apparatus that could replicate the state of food after it's been chewed and slobbered on by a human mouth.

And indeed if their included schematic is accurate, this is no welcoming mouth constructed. 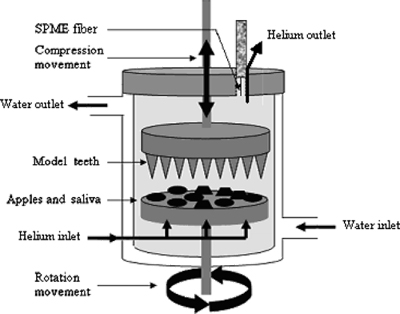 The artificial mouth comprises a 600mL container, a notched plunger, and variable-speed motors to control the speed of compression and rotation movements. The container is kept at 37°C (98.6°F), and as the food is broken down, helium flows through the device to reproduce breathing.

The researchers compared Golden Delicous apple slices chewed by people told to spit their mouthfuls when they were ready to swallow with slices chewed by the apparatus. The resulting pulp was analyzed for color, texture and aroma.

Consider when a person eating next to you rudely opens their food-stuffed mouth, what you are witnessing is, while completely disgusting, a marvel of nature not easily reproduced.

"Using a previous artificial mouth, we showed that the amounts of extracted volatile compounds were not the same when apples were crushed, cut into slices, or reduced to a puree state. It follows that to study the aroma compounds responsible for global aroma perception, it is necessary to reproduce the changes that the foodstuffs undergo in the human mouth."

With this new version of the munching machine, the scientists are satisfied with the replication of a human-chewed apple. Truly, the wonders of science knows no bounds. Their next step, according to the paper, will be to further compare the volatile compounds obtained from man- and machine-chewed apples to best mimic the human mouth.

We applaud the idea of one day owning a robot butler who could pre-masticate our sandwich before squeezing the perfectly replicated paste into our open mouths like a baby bird. Who wouldn't want that? But much could go wrong with this advancement.

By our recollection, the last real attempt to use a munching mouth for robots was in the Cabbage Patch Snack Time Kids doll. This proved disastrous, as the one-way mechanism which enabled the toy to "eat" its food proved completely insatiable. No mere plastic carrot stick or celery stalk included with the doll could appease its greedy metal rollers and rubber lips. The dolls discovered quickly discovered delights of chewing manflesh — and many a child's finger and lock of hair came out worse for our foolhardy attempts at replicating the human mouth.

And soon. Soon robotic horrors will even properly drool before feasting upon us. But at least their mouths will be a comfortable temperature. ®