Exclusive One day in May 2005, a 16-year-old hacker named SoBe opened his front door to find a swarm of FBI agents descending on his family's three-story house in Boca Raton, Florida. With an arm and leg in casts from a recent motorcycle accident, one agent grabbed his good arm while others seized thousands of dollars worth of computers, video game consoles and other electronics. His parents looked on.

At that moment, some 2,700 miles away, in the Los Angeles suburb of Downey, California, the FBI was serving a separate search warrant on Jeanson James Ancheta, SoBe's 20-year-old employer and hacking mentor. It was the second time in six months Ancheta had been raided by the FBI - a clear sign, had either bothered to notice, that their year-long botnet spree was unravelling. 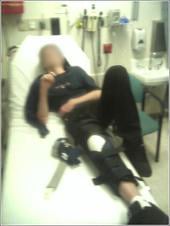 SoBe, a few weeks before the raid

But instead of abandoning the venture after the first raid, or at least laying low for a while, SoBe and Ancheta, according to court documents, continued hijacking hundreds of thousands of PCs that they would then corral into massive networks and infect with adware. So great was SoBe's sense of impunity he continued the scheme even after Ancheta was arrested a few months later and charged with 17 felonies related to the hijacking of almost 400,000 PCs, some of them belonging to the US Department of Defense.

"That's why I love this age, its all computers heh," SoBe wrote in early December 2005, a month after Ancheta's arrest, during an online chat. "All these companys have websites, etc. Its just funny going somewhere like Target, or Sprint then coming home and rooting there servers out of boredom. Makes some people feel like they can do anything." (Misspellings and grammatical errors are his.)

SoBe's adrenalin-fueled days of fast money were slowly coming to an end. His downfall started shortly after he and Ancheta launched their botnet venture, when some clumsy mistakes attracted the attention of federal investigators. It continued as their homes were raided, and shortly after that, when the feds seized more than $38,000 earmarked as SoBe's cut of the botnet profits. Then in May 2006, SoBe was shocked when he learned Ancheta received 57 months in prison after pleading guilty to four counts of fraud related to the scheme.

His undoing was completed in February, seven months after SoBe turned 18, when he pleaded guilty to two counts of juvenile delinquency related to his use of botnets.

SoBe - who also went under the names SoBe Owns, PwnZ0r, SerlissMc and vapidz - admitted to infecting computers belonging to the Defense Information Security Agency and Sandia National Laboratories. He was sentenced today in a closed-door hearing. Although the actual sentence is confidential because SoBe was a juvenile at time of the crimes, his plea agreement contemplated a prison term of 12 to 18 months.

Notes from the Internet Underground

In November, 2005, just a few days after Ancheta was indicted, SoBe began an internet correspondence with me that continued until a few weeks before he pleaded guilty. The result was more than 80 pages of single-spaced transcripts that provided a sometimes-candid, behind-the-scenes account of his botnet caper and the investigation that ultimately shut it down.

The conversations revealed a youth of above-average intelligence who nonetheless quit school after the eighth grade. With an abundance of time on his hands and little adult supervision, he thrived on the excitement of a life dominated by World of Warcraft, fast motorcycles and computer hacking. The Register is not identifying him because his crimes took place while he was a minor.

Read on to learn how SoBe and Resilient met