Fedora 9, the latest release from the Fedora Project, goes up for download on Tuesday. The ninth release of Fedora ushers in a number of changes aimed at making the venerable distribution a more newbie-friendly desktop, but longtime users needn't fear a great dumbing down; version 9 packs plenty of power user punch as well.

Fedora is a community-driven distribution sponsored by Red Hat and, while Fedora may be best known as a popular server OS, most of the changes in Fedora 9 are aimed at making the system friendlier for desktop users.

The Fedora team has clearly spent a lot of time trying to refine some of the smaller, but perhaps more common user interface elements in some thoughtful ways. Take, for instance, the new setting that allows you to manage power settings from the login screen. It's a small tweak but it makes shutting down simple. There's no need to login when you wake from hibernate - just shut down straight from the login screen. Similar attention to these basics can be found throughout the new release.

Partitions and PDF for Newbies

Fedora 9 features PackageKit for software management which can tie into a number of back ends regardless of what method you're using - UM, RPG, Apt, etc.

PackageKit also supports on-demand software dependencies for default apps, print drivers and more. For example if you download a PDF file, but don't have a PDF viewer installed, when you try to open the file PackageKit sees that you don't have a PDF Viewer and offers to install the software you need - a definite win for the new user. On the downside, these features only work if there's an open source package available to handle the file. If you're dealing with a Flash movie, for instance, you'll have to find and install the necessary proprietary software yourself.

The new Fedora 9 installer also makes resizing disk partitions much easier - something that's long been a source of confusion for Linux newcomers. The new installation interface can even handle NTFS formatted disks. Also new is a nice little the password strength indicator that lets you know how good your passwords are. 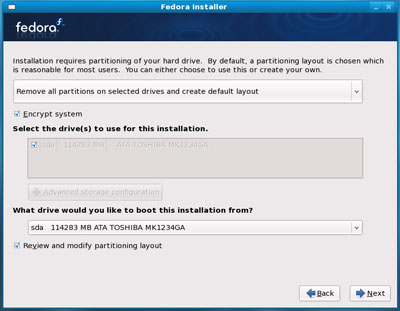 Partitioning the hard disk in Fedora 9

Perhaps the most interesting news in Fedora 9 is the release of what amounts to a complete live, carry-anywhere USB solution. The ability to create a Live USB stick from the LiveCD media was part of earlier Fedora releases, but the ability to have persistent data and to do a non-destructive install are both new.

Headed to a friend's house and don't want to use Vista? [Has it come to that - Ed?] Just bring along your LiveUSB and boot up. Any changes you make, documents you create or software you install will all be saved to your USB drive and available the next time you plug it in. And that applies not just to user installed files and apps, but the system as well, which means any system update you find will be part of your Live USB partition.

And if your friend wants a copy of Fedora, no problem. Just install Fedora on a USB stick with sufficient space and any existing files on the disk will be left intact. For the low, low price of $99.95 in installation fees, of course.

Perhaps the most impressive part of the Live USB features is that boot times were on par with an actual hard disk install. The only downside is on older machines where USB booting may not be possible (it's worth poking around in your BIOS settings, we had to do as much to get my Toshiba to boot from the USB stick). The other thing worth noting is that the USB boots from syslinux rather than GRUB, which is probably more familiar to Linux newcomers. For the most part syslinux is very similar, but it does boot slightly differently.

The Fedora team sent us a 2GB USB stick, which worked fine and wasn't noticeably cramped; however, we went ahead and installed the USBLive tools on our own 8GB stick for added storage space and it did seem marginally faster (though that's probably more a result of the relative read/write speeds of the two sticks, rather than an inherent Fedora issue).

Naturally, Fedora isn't giving you the new ease of use features at the expense of power user options. If you want to dig into the internals of partitioning your disk or tweak your laptop power settings from the shell, all the same tools are still there. But it's nice to know that you don't *have* to.

Next page: A Nod to Security
Page: