Everyone's favourite flying-cattleprod maker, Taser International, has won a new contract with the US military. The firm also announced a new "peel and stick" conversion kit for police riot shields, allowing their outer face to function like a sort of portable electric fence.

Under the new military contract, the Pentagon's Joint Non-Lethal Weapons Department will give Taser $2.6m to develop and demonstrate new technologies. 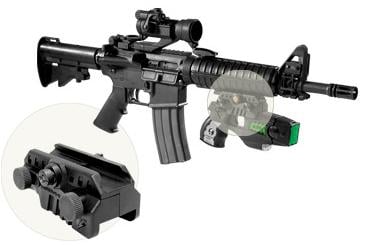 "Taser International continues to be committed to building on our long standing relationship with the Department of Defense," said Tom Smith, Taser founder. "This contract award allows us to develop new technologies."

At present, Taser's military offerings are a trifle limited. There's a kit allowing a normal Taser electrobarb-firing stungun to be mounted beneath the barrel of an assault rifle, which offers a soldier the option of zapping an opponent rather than blowing him away - provided there's only one enemy, anyway, and he's close enough. (The maximum effective range of a present-day Taser is only a few metres, and it's a single-shot weapon.)

Alternatively, there's a kind of Taser version of the Claymore directional landmine. Rather than blasting a cone of lethal steel shrapnel, the Taser Shockwave system fires salvoes of flying cattleprod barbs on wires. But it seems likely to have issues around waterproofing, effective range, battery life and so forth. Shockwave doesn't seem to have aroused much interest.

Taser is tight-lipped regarding just what kind of new electric weaponry it might develop under this week's Pentagon deal, but does note that "the Non-Lethal Weapons Directorate is in negotiations with Taser to develop a neuro-muscular incapacitation projectile, which will be compatible with the current family of military ground weaponry."

The company has previously announced that it is working on a Taser electric stun module with its own power which could be fired from a standard twelve-bore shotgun. This could potentially achieve greater range and accuracy than the current compressed-air launchers, which deploy contacts trailing wires back to a battery in the gun. Shotguns are in common use by US cops, but much less so among the military. (This is because regular cartridges throwing lead shot are frequently considered illegal under the laws of civilised warfare, much like "dum-dum" expanding bullets - though they are legally fine for police use.) 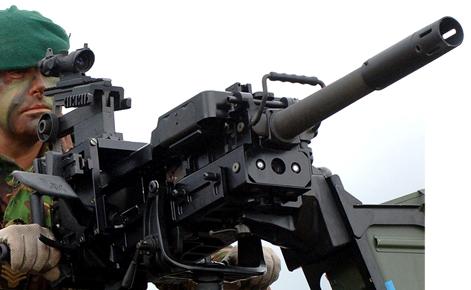 This is what you want.

If the Reg defence desk had to take a guess, we'd predict that Taser will be developing a 40mm grenade-format option under the new contract. Forty-mil launchers are found throughout the armed forces of the US and its allies, ranging from single-shot jobs mounted below rifle barrels up to bigger machine-gun style models which can be mounted on tripods, vehicles or even helicopters. These larger weapons can fire hundreds of 40mm rounds per minute, opening up prospects of electric enforcement on a truly heroic scale.

Meanwhile, it seems that the new "Taser Repel Laminate Film" riot-shield upgrade kit will be available from Q4 2008 at an undisclosed price. It will include a peel-and-stick coating and a powerpack to be worn as part of a cop's riot gear. According to Taser, the shield's laminated face "becomes electrified, providing a powerful deterrent to protect officers and keep suspects or rioters at bay".

Whatever's next? Electrified body-armour suits? Gauntlets? Truly, the day of the electric cop would seem to be upon us. And we can think of lots of other things one might do with this sort of Taser-on-a-roll technology. Troublesome dogs or drunks relieving themselves against your wall? People keep touching your car? Borrowing your stuff?

Cover it in peel-and-stick zappercoat (with a car-key-style remote disarm as required), plug it in and watch the fun (and lawsuits) begin. ®