Back to the time-shifting

The Silverlight hurdle to coders follows a similar handicap thrown to designers, the other big constituency Microsoft is targeting with Silverlight.

And it's here that the plot really thickens, over what - and when - Microsoft's development team is really telling the public. More on that later, first: Visual Studio 2008 and Silverlight.

You're going to have to uninstall the Silverlight 2 tools beta 1 to evaluate the Visual Studio 2008 SP1 beta, otherwise you'll get an error message (see below). 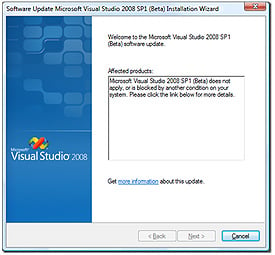 That's a major problem, given Visual Studio 2008 is the latest version of Microsoft's integrated development environment, and the one it wants you running.

The "good news" - according to Microsoft's Visual Web Developer blog - is the problem will be fixed with Silverlight tools beta 2 for Visual Studio 2008 SP 1. It's just not clear when that's coming.

A Microsoft spokesperson, meanwhile, shifted the debate from tools to the runtime, saying the issue will be resolved with the release of Silverlight 2 beta 2, officially due in the second half of 2008. Of course, they could all be right, as it's now May and the second-half of the year - June - is two and a half weeks away.

This, of course, indicates the Silverlight beta 2 is therefor coming in June. Microsoft, though, refused to go further than "second half of 2008" when asked by Reg Dev to clarify.

But it's not just the Visual Studio 2008 SP1 beta, or the way Microsoft is disclosing the issues, that's causing problems and raising questions.

Expression Blend is the design suite for Silverlight designed to complement the code-centric Visual Studio.

The problem between the .NET Framework 3.5 SP1 beta and Blend, and the issues with Silverlight 2 tools and Visual Studio SP1 beta were discussed in a blog posting dated a month ago by Microsoft's Expression Blend and Design team. That blog is dated April 18 and clearly discusses the SPs' availability.

How was Microsoft blogging about the issue in April? And, if the two betas were already out there, then what were Somasegar and Guthrie engaging in on Monday other than PR?

While some suspect Microsoft of playing with the dates on its blog software, Microsoft's spokesperson told Reg Dev the inconsistency as an "issue" with its blogging software, saying the April 18 date is incorrect.

Patch Tuesday Light load from Redmond as everyone else seeks to bury bad news, sorry, align in update cadence

Flash still works in China, but you need to ask Adobe nicely before running it

The new normal is all right for some