Google has begun to roll out Street View images with the faces of innocent bystanders to its drive-by captures suitably blurred - a response to increasing privacy concerns over the service's indiscriminate broadcasting of the unwashed masses.

A post on the Google Earth and Maps blog earlier this week explained the search monolith was testing its "new face-blurring technology on the busy streets of Manhattan", as seen here: 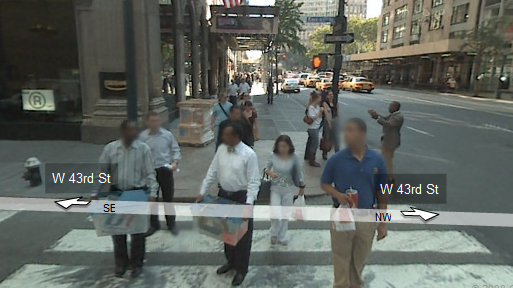 The post adds: "This effort has been a year in the making - working at Street View-scale is a tough challenge that required us to advance state-of-the-art automatic face detection, and we continue working hard to improve it as we roll it out for our existing and future imagery."

This timely move comes as the Street View camera vehicle is reported to be prowling the streets of several European cities. The EU has "stricter privacy safeguards" than the US, and Google has "already admitted that it will have to change the way Street View operates in order to comply".

Google global privacy counsel Peter Fleischer said in April: "We've always said Street View will respect local laws wherever it is available and we recognise that other countries strike a different balance between the concept of 'public spaces' and individuals' right to privacy in those public spaces.

"There's an important public policy debate in every country around what privacy means in public spaces. That balance will vary from country to country, and Street View will respect it."

Despite the US's relatively relaxed attitude to privacy, Google has fallen foul of a couple of indignant local property owners: Mr and Mrs Boring of Pittsburgh who accused the company of "photographing their swimming pool and posting it to the web"; and, rather more seriously, the Pentagon which was a little hacked off over revealing snaps of Fort Sam Houston.

In the latter case, Google responded by removing the offending pics from Street View. Its policy on individuals caught on camera has, since last August, involved a similar "delete-on-request" service. ®