Privacy? Forget it. Sell your brain and desires to the highest bidder

Comment All around us the toasters are getting smarter. Sadly, we don't seem to be keeping up with the program. We remain poor schlubs.

In the good old days, a toaster was just a toaster. It warmed bread and issued the odd electrocution. Tomorrow's toaster, however, brings with it a new set of functions that travel well beyond bread.

As we hear it, the toaster of the future will contain more silicon and communications systems. It will have sensors that can detect an upcoming failure, and alert you, via e-mail perhaps, to order a new toaster. Or maybe the toaster will order a new version of itself from the internet if you've enabled the self-upgrade feature. That future toaster may also talk to other gadgets in the home. Perhaps they'll agree on when they should shut down to save energy or to avoid a fire. Maybe they'll agree on the next brand for their upgrade cycle and make sure you get matching stainless steel appliances throughout the home or that your current penchant for pastel kit is obeyed.

None of this should sound terribly new. Overzealous technology folks have predicted the age of the internet-enabled toaster and refrigerator for years. "You've been getting your weather reports from the newspaper, TV and Yahoo! for years like suckers. Once you move to utopia, the weather will be displayed on your fridge door or coffee machine. The revolution is at hand."

What's more intriguing about the toaster of the future is the communications it will have with folks other than you. Maybe Wal-Mart will notice a toaster has left its shelves thanks to a sensor network. The retail giant's data warehouse systems will then spring into action and tell a weary guy in China to wake up and make a new toaster.

In the meantime, some government machine will be tracking all of the toasters making their way from China to the US. Thanks to something called Stream Processing, the Feds will be able to recognize if an unusual amount of toasters have entered the Chicago area. The same processing technology will then grab the toaster recipients' addresses and compare them with credit card, hotel, flight and phone records. Perhaps a pattern will emerge - an awful lot of the toaster buyers seemed to visit Vancouver this year while also dialing a chap called Tom Tiburban. "We've nailed it, Jim. Osama is in the Windy City, and seems to have recruited an army of toaster buyers to make a fantastically huge shock machine. They're going to dump it in Lake Michigan and kill whatever fish remain. I won't let this happen on my watch."

And if the government isn't tracking the inner-workings of your toaster relationships, then a company like Wal-Mart, Amazon or Facebook is. Chris Meyer, the CEO of Monitor Networks, describes this Brave New World as "The Offer."

Speaking to a group of scientists, computer geeks and marketeers this month at IBM's Almaden research center in San Jose, Meyer presented The Offer as the underlying principle behind a world where there is "no product without service and no service without product."

The Offer concept is a bit vague, but you can think of it as a company forming a lifetime bond with you. No longer do you buy a toaster, throw it away and then buy another one. Instead, you buy the toaster, receive some firmware upgrade service that promises to improve future toasting (or perhaps a bagel expansion pack) and no doubt other wonderful services. "We notice that you toast a lot in the weeks leading up to a vacation. Can we offer you discounted travel from a partner after sensing heightened toaster activity? Or perhaps you'd like those photos of your children displayed on the side of the toaster. No problem. Hold down the toaster button for one minute to trigger the photo purchase and display sequence provided by our friends at TstrPic."

Behind The Offer is a process where products and services "sense, respond, learn and adapt." That process looks like this, according to Meyer. 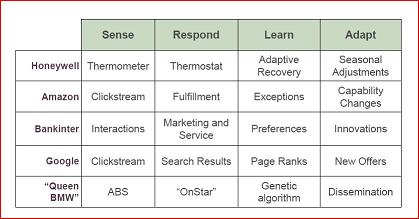 We don't want to freak you out too much, but part of this offer adaptation mechanism would involve, say, BMW pulling driving data from your cars. It will first use that information to help with your driving. Your car might use sensors to communicate with a nearby vehicle and discover that the driver of that car often breaks at the last minute. So, your car will, er, tighten up or something along those lines to deal with the crappy driver near it. Later on, BMW might collect all of the sensor data to produce cars for different regions that reflect the driving conditions of those locales.

Apparently, all of that would result in this: 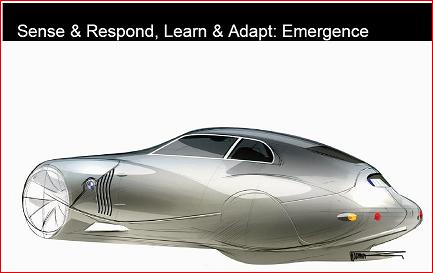 We're too scared to show you what a post-Offer toaster looks like.

The Offer feels a tad crazy. Can a toaster vendor really form a meaningful, lifelong relationship with a human? And what about a bag of potting soil?

But people are out there trying their hardest to make sure that sweaters - if not toasters - do bond with you. That's more or less the underlying goal of things like Facebook's Beacon, the eerie Phorm project and even Comscore's mouse peeping, to a degree.

IBM's recent Almaden Institute event explored the many ways that companies and people might use data in the coming years. We learned about the examples mentioned above and also discovered roadside sensors that can alert meter maids to law breaking cars, an oncoming torrent of scientific data fueled by the rise of supercomputing and all sorts of other people-tracking techniques.

Even though the discussions centered on exploiting data for new business models, the speakers were surprisingly measured. It may have been because most of them were researchers - folks forced to pretend they've got something to sell in order to keep their well-paying jobs.

You may be pleased to learn that the two-day event did include a session on privacy . . . from a Microsoft researcher . . . who thankfully seemed to want to protect your privacy. Go figure.

But what does privacy even mean in this world of intelligent toasters?