A Dutch PhD student believes she may have developed a ground-based method useful for identifying people who are subject to space sickness, following lengthy research during which she whirled astronauts around in a centrifuge.

Suzanne Nooij defended her thesis yesterday at the Delft University of Technology. While Nooij herself has never been an astronaut, her research was supervised by Professor Wubbo Ockels, the first Dutchman in space*. 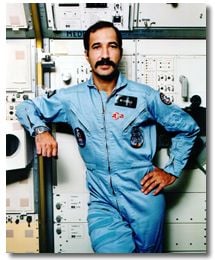 Essentially, Suzanne - backed by Wubbo - contends that an astronaut who will suffer so-called Space Adaptation Syndrome (SAS) in microgravity conditions will also suffer it after being vigorously centrifuged at 3G for an hour or so. The spinning and attendant squashing are apparently "not unpleasant", but once you get out of the centrifuge you'll puke - if you're the type who'll get SAS, anyway.

Thus, runs the thinking, the nausea is not the result of zero-G per se, but simply of changing to a different gravitational environment. This was demonstrated, apparently, by spinning 15 former astronauts - who had suffered SAS in orbit - in the big funhouse at the Centre for Man and Aviation in Soesterberg. It doesn't say here whether Ockels - who suffered from space queasiness when he flew on the space shuttle in 1985 - was one of the 15.

It also appears that there is a relationship between having left and right inner ear mechanisms which are asymmetric, and suffering from space sickness.

All this would seem to suggest that a combination of centrifuging and detailed inner-ear scans might allow astronaut selection programmes - which are underway with both NASA and ESA at present - to eliminate people likely to get SAS at an early stage. Apparently, at the moment about half of space aces spend their first few days in orbit feeling horribly ill or even suffering hallucinations.

Nooij also believes that her research may have relevance to "the application of artificial gravity during space flight". ®

*If you think that this article was primarily motivated by the chance to write "Wubbo Ockels, the first Dutchman in space", there may be a grain of truth to your thoughts. More on Ockels from NASA here.