If you’ve reached that age where Saturday nights are taken up with dinner parties, don’t you sometimes wish you could be playing videogames instead? Well, thanks to one inventor, you can now do both. 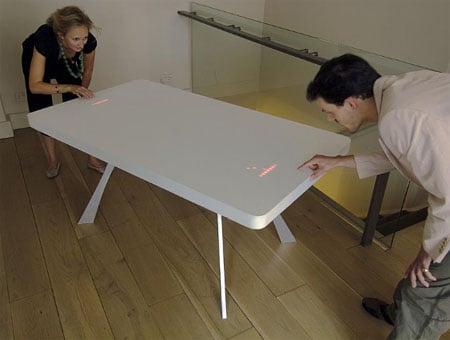 The Pong table isn't for eating off, or is it?

Mortiz Waldemeyer has designed a white dining table that doubles-up as an interactive Pong playing surface. Apparently, the table has 2400 integrated LEDs and trackpads at either end, allowing gamers to bounce the ‘ball’ back and forth.

Of course, playing the game whilst the table’s laden with delicious food and glasses of wine probably isn’t a good idea.

The table is only a prototype at the moment and no plans to develop it commercially have been mentioned. So, for now, you’ll just have to make do with discreetly watching football on a handheld TV underneath the table.

Pong, anyone? How about Pong on a vintage oscilloscope?

Doable, if you have a soldering iron and a couple of hundred transistors

Who, Me? Techie swiftly looks for a new job – but takes the 'embellishments' off his CV

Pong creator turns nose up at Nintendo Wii U