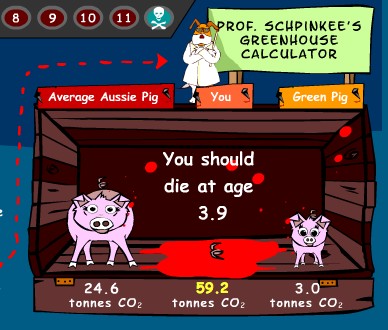 Your reporter doesn't own a car, lives in an apartment, and discovered he should have died aged 3.9 years. After a couple of run-throughs, it appears that eating meat is a major factor. But this is overshadowed by claiming a) very low earnings and b) spending what remains of one's pittance on organic food and "ethical investments".

Whether that's a life worth living is another question entirely. But the message from the Carbon Cult seems pretty clear: humans are a stain on the planet and should die; yet should they be permitted to live, they should live a life that's as miserable as possible.

When you fill in the environmentally-correct answers - something extraordinary happens. Look -

A negative carbon rating is achieved, the pig flies up to heaven... 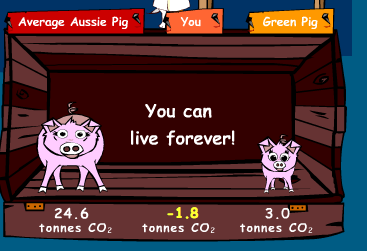 ...and eternal life is attained.

(Where presumably you're surrounded by 72 naked George Monbiots. A Guardian-reader's idea of paradise?)

So when should you have died, dear reader? Take the quiz and let me know - and we'll try and think of some creative way of illustrating it. (Suggestions welcome). ®