But Linux version to cost more than the Windows XP model

Computex Asus has announced the anticipated Intel Atom-based Eee PC - and a pair of new models that, the company claimed, boost battery life to more than seven hours. Oh, and they sport 10in displays, hard drives and 802.11n Wi-Fi.

As expected, the new version of the current 8.9in Eee PC 900 is the 901, while the 10in versions are dubbed the 1000 and 1000H - the former has Linux, the latter Windows XP Home. Both have a keyboard that's only eight per cent smaller than a standard laptop keyboard. 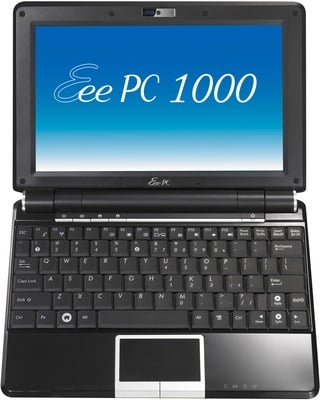 All three models incorporate what Asus is called Super Hybrid Engine technology, which despite sounding like it's a component out of the Toyota Prius is actually an underclocking tool that allows users to "adjust CPU frequency, voltage and LCD brightness to minimise system noise and power consumption to save up to 15 per cent power consumption, or to maximise system performance according to individual needs".

More to the point Asus' spec sheet apparently promises 3.2 hours minimum battery life - thanks, not least, to Asus' decision to ship the machines with a six-cell battery. Previous Eees have come with four-cell power-packs as standard.

As per previous Eee PCs, they have the usual array of three USB ports, a VGA connector, SDHC card reader, audio sockets, 10/100Mb/s Ethernet port. Their screens incorporate a 1.3-megapixel webcam too.

You'll note that the Linux model is more expensive, but that's undoubtedly a result of all that solid-state storage and its cost relative to hard disks. 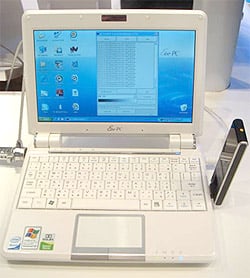 The 901 and WiMax dongle

Demo'd at the Computex show in Taipei today, the Eee PCs were accompanied by a "concept sample" with integrated HSPDA, and a 901 with WiMax. Well, sort of - the machine was actually attached to Asus' bulky WUSB25E2V2 WiMax USB dongle.