TechEd 2008 Bill Gates has announced the next betas of Internet Explorer 8 and Silverlight 2 while outlining plans from Microsoft on development services. He also took the opportunity in his valedictory keynote at TechEd in Orlando, Florida today to unveil a Steve Ballmer 'bot.

The second beta for IE8 is released in August in 20 languages, so hitting the summer launch, that Microsoft had previously promised.

To promote Microsoft's work on robotics Gates demoed a Windows-powered robot with a monitor showing Steve Ballmer's face. On cue, the Robot Steve waved his arms up and down and began shouting "Developers! Developers! Developers!", after throwing an egg across the stage. 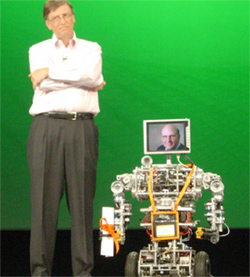 Gates today hosted his last TechEd before stepping down from day-to-day activities next month after 38 years with Microsoft.

It was a stoic affair, during which Gate's sole concession to emotion came when he credited Microsoft's success to its relationship with developers. Gates said next-month's transition to the new technology leadership at Microsoft was going very well.

Microsoft has tried the patience of developers many times. There was the transition from Visual Basic 6.0 to Visual Basic.NET. Then the ill-advised decision to stop serious work on IE, and fold it back into Windows. That was reversed once Firefox began nibbling away at IE's market share.

Gates noted his company had "a renewed effort to invest in Internet Explorer".

"We are hard at work on a new version of that: IE 8 - a very creative name we came up with," he said.

He also talked up Microsoft's plans for Oslo, which will feature a new modeling language, repository, storage mechanism and way to manipulate models. A Community Technology Preview (CTP) is due this fall. The next edition of Visual Studio, meanwhile, will support the Object Management Group's Unified Modeling Language (UML).

After years of industry talk on models and re-use, neither has quite fulfilled their potential. According to Gates, Oslo will get things right, and take the "richness" of distributed, online services and bring them together into "one rich framework".

According to Gates, Oslo will enable ambitious forms of development. This will coincide with the rollout of more services from Microsoft, similar to SQL Server Data Services and BizTalk Server Services. Gates promised Microsoft would run these on millions of servers in its data centers, up from just hundreds of thousands today.

He said Microsoft's SharePoint Server would become the first Microsoft product to use enterprise search from its Fast Search and Transfer acquisition. The delayed SQL Server will be next. "Think of it as SQL Server, but it's really Fast," he said.

For all the talk of data services, there was still no date on the next edition of SQL Server. Demonstrating SQL Server 2008, Dave Campbell, from Microsoft's data storage platform division said SQL Server 2008 would be available in the "next month or two".®