Computex Nvidia has taken the wraps off the next incarnation of its notebook-oriented graphics chip line, dubbed unsurprisingly the GeForce 9M series.

The chip maker claimed the parts will be up to 40 per cent faster than their GeForce 8M equivalents and ten times faster than typical laptop-oriented integrated GPUs. That gives them the horsepower needed to support the latest additions to the Blu-ray Disc spec, including dual-stream video for picture-in-picture presentations. 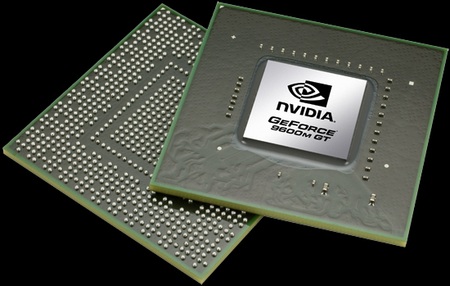 However, Nvidia was most keen to stress the chips' support for Hybrid SLI, allowing them to be partnered with an integrated graphics core - from Nvidia, natch - to co-operatively render 3D graphics and to save power by allowing the discrete part to be turned off when it's not needed, leaving the integrated part to handle basic 2D and 3D graphics.

Nvidia didn't say when the GeForce 9M family members will ship exactly, but it suggested that machines incorporating them will launch "this summer".

The GPUs will also ship integrated on MXM 3.0 modules.