Clearly, we're all in the wrong business

EMC has been spending a pretty penny to lobby the US government in the first quarter. The storage vendor disclosed it payed out $730,000 wooing Washington in only three months — a personal record since it began disclosing its lobbying activities.

According to the company's previous filings, the money EMC spent on lobbying during its first quarter has already exceeded the amount it spent during the entire first half of 2007 - by $30,000.

So let's see what strings EMC is attempting to tug in Washington. The company is a member of five major IT trade associations that lobby the US government, and that's where most of the money goes. EMC's report is pretty short on specifics — although it's possible to see where these IT groups are lining pockets.

The disclosure form lists lobbying for banking industry internet crimes issues. EMC has put its weight behind H.R. 4791, a bill which seeks to formalize data breach/loss reporting requirements and mandates encryption of personal and sensitive records. EMC has also lobbied on other "cybercrime issues related to the banking industry."

The company also stated it has funded internet security initiatives for defense technology programs as well as "cybersecurity" programs inside the Department of Homeland Security.

Probably not a bad idea. But, yes, it's also an opportunity for EMC to sell encryption gear to government departments. 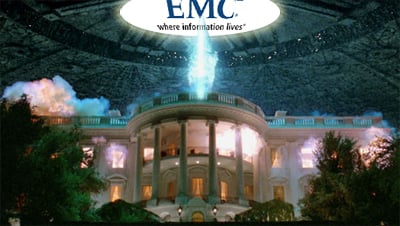 OK a bit abstract, but if you just imagine the beam as dollars coming down fro...

At the same time, EMC is lobbying for S. 1145, or the Patent Reform Act of 2007. The bill defines patent law term and modifies the conditions under which a patent may be obtained. The most controversial aspect of the bill, however, is a change to reasonable royalty recovery. The legislation would limit damages to the economic value attributable only to what is new or inventive in the patent. Opponents claim it would make it easier for large corporations to infringe on patents from individuals or small companies.

The company has also lobbied for "cyber initiatives/homeland security," as well as privacy and standards issues, but it listed no specific legislation.

The last piece of legislation EMC names is S. 1693, The Wired for Health Care Quality Act. The bill seeks to fund a national health care network. A storage company gunning for an enormous government database? Say it ain't so!

If you're absolutely itching to gaze upon some hot lobbying disclosure forms, we've got your medicine right here. (Warning: PDF may cause nausea, constipation) ®