Meet the website promising to defy the tyranny of choice

Updated The Filter wants to be your internet friend. And unlike Facebook, it wants to help you ignore all the morons, self-broadcasters and general noisy bombardment that characterises the modern web experience.

The pitch is simple. Web users are presented with limitless entertainment choices, and the majority of them are rubbish. To most of us, at least 90 per cent of the sound and video available online is utter tosh, although which 90 per cent naturally varies according to taste. The Filter promises to intelligently sift through all those songs, movies and TV shows to generate a more palatable daily media diet. 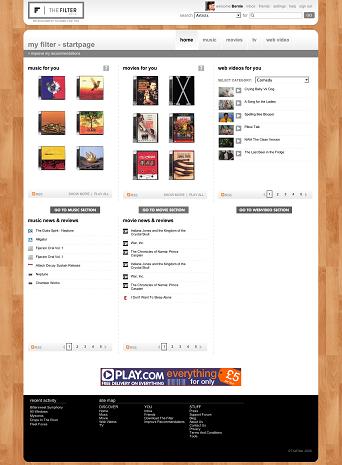 The site's been in private beta for a while, and in April got some early loving in the US media. On Tuesday it opened to the hoi polloi and staged a launch for mainstream and web-fancying UK press in London.

Amid the throng of crappy web start-ups, long overdue a cull (we're polishing our "titsup 2.0" headlines daily in preparation), The Filter has star power thanks to the involvement of former Genesis frontman-turned-web-entrepeneur Peter Gabriel.

The Filter's auto-critic is based on Bayesian mathematics, a branch of probability that has come to be used widely in attempts at artificial intelligence such as anti-spam tools and genetic sequence processing.

Bayesian inference can combine background data with a few points of evidence to work out the probability of an unknown. The Filter's background data for music recommendation is 50 million sales and playlists imported from the Nokia store and MSN music. Its evidence is the preferences you give it when you sign up, which it uses to estimate whether you'll like, say, Peter Gabriel if you like Genesis (probably).

Gabriel is mostly acting as the public figurehead of the operation, while also providing financial and evangelical backing, like a wealthy musical Buddha. He told El Reg: "If you look at the major religions, freedom from choice is something people often choose voluntarily. It allows people to look in themselves." Blimey.

The Bayesian algorithm generates a raw list of recommendations, which is then passed through a series of user-adjustable filters (geddit?) designed to allow for mood.

It's a subtly different approach those used by fellow music recommendation engine Last.fm, owned by US conglomerate CBS. The Filter claims testing has shown its mathematical approach produces superior recommendations to Last.fm's community-based "wisdom of crowds" (ahem) kung fu. Unlike CBS, The Filter doesn't have full song licensing deals with record labels, however, so for now acts less as a personal radio station and more as jump-off point.