Battle of the SSD strategies: Sun vs. EMC

Living information takes on the dot in dot-com

How do the flash solid state disk (SDD) strategies of EMC and Sun differ?

EMC is super-charging its Symmetrix arrays with enterprise flash solid state drives (SSD). The idea is to have the most frequently accessed data reside in a tier zero of SSD storage with less frequently-accessed data in Fibre Channel hard disk drives (HDD). Accessing servers will link to Symmetrix as external storage and not 'see' the SSD tier as logically separate from any other storage tier in Symmetrix, it just being much faster storage still presented as drives in an array.

Sun's tack is different and it wants to use flash as a cache glue to bind storage and servers closer together. It appears that for Sun flash is a server direct-attached storage (DAS) medium and not an external-attach storage medium.

Sun is going to supercharge its servers and storage with SSD positioned as a cache between disk drives and a server's main memory. Sun people describe a storage hierarchy starting with registers and level 1 cache in processor cores, level 2 cache between the processor cores and main memory (DRAM) and, from now on, level 3 or 4 cache being flash SSD sitting between DRAM and hard drives.

The company sees flash supporting both read-intensive I/O and write-intensive I/O. On the read side the flash becomes a cheap extension to DRAM and enables a much larger working set for applications. Instead of having to page between main memory and disk as is common with virtual memory they can page between DRAM and flash. So applications run faster. 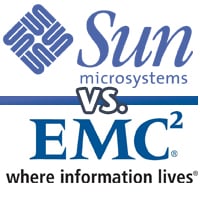 On the write side the flash, because it is non-volatile, can be used to store transaction-type data that an app needs to know is written to non-volatile storage, committed, before it can move on to other work. This refers to system software, such as ZFS and databases, as well as to transaction-processing software. So applications run faster again.

Sun will refresh its server and hybrid server/storage hardware with flash. Sun blogger Taylor Allis writes: "we are introducing a new product line with multiple options that span storage and server systems."

Flash is a critical part of Sun's Open Storage plans with Open Storage being a combination on open source software and industry-standard hardware. Open Storage customers will be able to choose between hard disk drives (HDD) and solid state storage (SSD) or a hybrid combination with software products optimized to use SSD to store working data and so access ot faster and, clearly, operate faster.