Toys'R'Us has revealed details about an upcoming Guitar Hero: On Tour bundle pack for the Nintendo DS, which should get portable gamers thrashing air-guitar virtually anywhere. 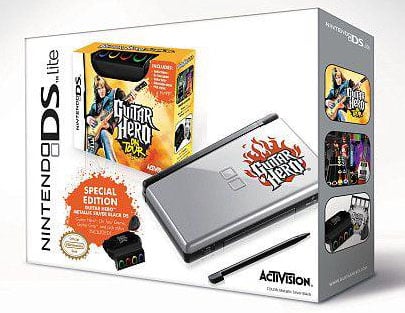 The retailer’s website reportedly displayed a page, which has now been removed, that showed a special edition Nintendo DS Lite hardware bundle for the upcoming videogame.

The handheld console is metallic silver and has a flaming Guitar Hero design on one side of its lid. Of course, also bundled into the pack is a copy of the videogame and four-fingered guitar grip that clips onto the console.

According to a story on website 1up, the bundle appeared on ToysRUs.com for $180 (£90/€125). We haven’t heard anything about a UK release for the bundle pack, but the videogame will be released here on 18 July.