Moon darkside to be penetrated by crustbuster barrage

Penetrator probe missiles designed to be fired from an orbiting, robotic space mothership into the dark side of the Moon have been tested on targets in Wales. The moon harpoons are expected to confirm the exact makeup of the lunar crust, possibly by the deployment of robotic moon-tunnelling mole cruisers. 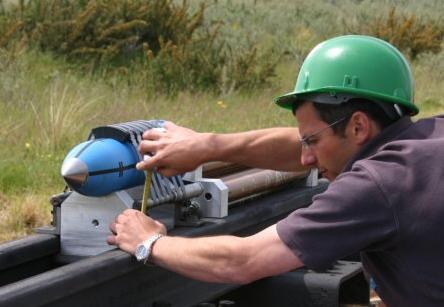 It's all about how you use it, apparently.

"The successful trials took place at our long test track at Pendine which is more commonly used to prove new weapons systems," said QinetiQ's Clive Richardson. "The penetrator engineering concepts also come out of long-standing military research programmes ... MoonLITE [is] a ground-breaking mission that is set to reveal many secrets about unexplored areas of the Moon."

According to a trans-Atlantic working group report into UK/US lunar cooperation, relatively lightweight British probe missile technology sent to the Moon by NASA could do some pretty cool stuff.

A package at the South Pole could address science and exploration questions... Is the Moon conductive to human life? How do the environment, atmosphere, and ionosphere vary?... Samples could be extracted via a simple corer, via an ultrasonic drill, or even subsurface via a Mole.

Promisingly, Qinetiq note that their prototype lunar crust-busters included a "drill mechanism", indicating at least partial burrowing capability. Rather than being shot into a large cheese or similar, they were apparently stopped by a big heap of sand.

The "telecommunications" part of MoonLITE is that the drill-tipped probe missiles would send back information on what they had discovered to their robot carrier ship in orbit around the Moon, and thence onward to Earth. Any subsurface, air-filled caverns or other places "conductive to human life" would thus be easy targets for follow-on Earthling invasion/colonisation forces.

It seems that the Moon might also harbour relics left by humanity's spacefaring ancestors of long ago, as the joint working group also said "the Moon may be the better place to search for the remains of both early Martian and early terrestrial life".

In this case the boffins are probably talking about our very remote, single-celled ancestors travelling on bits of Earth or Mars smashed off in meteor or comet impacts - as opposed to a long-extinct human spacegoing civilisation or similar. Lost temples filled with high-tech artifacts in underground, air-filled Lunar caverns - perhaps guarded by a bizarre race of mutant mushroom men - not really on offer, unfortunately.

Even so, interplanetary* dark-side orbital mole-drill bombardment is definitely a more robust kind of space programme. Let's see those weenies at the ISS match that. ®

Yeah, you and the entire country

'People have been left in the dark for too long'