Visual Studio lacks any sort of visual designer, though you can edit XAML and see a preview. Blend is at the other extreme, with a sophisticated visual designer but no code editor. You will probably end up running both at once, which means learning two very different tools. The Blend property editor is so elaborate that it has a property search box to help you navigate.

Earlier Silverlight previews had few controls. Beta 2.0 has a ton of them, 38 in the toolbox by my count. Existing controls have been improved and fixed, so for example the TextBox now supports scrolling and word wrap. The corporate vice president of Microsoft's developer division Scott Guthrie has promised more than 100 for the final release.

Note there is sleight of hand over deployment. The small Silverlight download only includes core controls. Important controls like the DataGrid are not part of the core set, but bundled into your application, which means that users will typically end up with multiple copies; and Visual Studio does not make it obvious which are which.

When combined with a few lines of Microsoft's Language Integrated Query (LINQ) project and a Windows Communication Foundation (WCF) data service on the server, the DataGrid control lets you put together a good-looking database query application in very little time. In beta 2.0, users can sort columns by clicking on the header, and re-order columns at runtime. Another neat control is MultiScaleImage. This is for displaying Deep Zoom images, a technology that enables very large images to be published on the web without loss of performance. 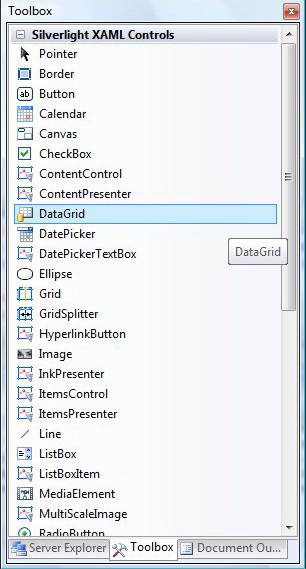 More controls in your toolbox

The new Visual State Manager lets you create custom effects for state transitions within controls, such as Pressed and MouseOver, using only the Expression design tool.

On the media side, beta 2.0 now supports adaptive streaming, which means Silverlight can select from multiple bit-rates at runtime and select the one appropriate for the user's connection speed. Support for Digital Rights Management (DRM) is also introduced.

Silverlight 2.0 supports both HTTP requests and sockets for general network communication. The socket classes wrap native socket support on Windows or OS X. The big issue here is security, which is based on cross-domain policy files in either Silverlight or Flash format.