Review It's take two for Motorola's kick slider concept. With the Z10, the phone maker has refined the back-bending sliderphone quirkiness of last year’s Z8 with an upgraded features list and a more sober design.

The Z10 is geared up with high-speed HSDPA 3G data connectivity; a 3.2-megapixel camera with enhanced imaging and video software; and is powered by the Symbian operating system and UIQ user interface. 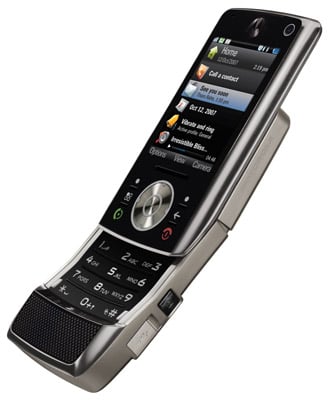 Then there's Motorola’s kick slider – a mutation of the conventional slider that, as it opens, hinges the phone into a curved, more face-fitting shape. This clever engineering supposedly improves call quality by bringing the microphone closer to the mouth. Its other important role, of course, is as a neat bit of gaze-grabbing gadgetry. Speaking of which, Motorola has reworked the Z8’s lime green livery with a more mainstream chrome-edged, silver and black look

Motorola is pushing the Z10 as a movie-making mobile, including a reasonable video capture facility and an ArcSoft Media Editor software suite to edit video clips in-phone. Users can then upload them directly to YouTube or a host of other sites online straight from the phone using a Shozu application.

But while you may not be able to shoot Hollywood quality movies on the Z10, you can watch them. Motorola has packaged a 1GB Micro SD card with the device - on board, the three movies in the Bourne trilogy. The Z10 also supports downloadable full length movies from Motorola’s recently launched digital movie service with Paramount Digital Entertainment.