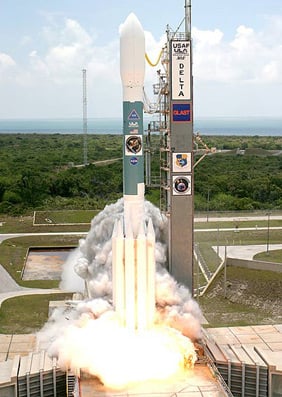 The 'scope is now in a circular orbit around 560km (350 miles) above Earth, with its solar panels deployed and ready to get on with its task of "monitoring the universe", the agency reports.

NASA describes GLAST as "a powerful space observatory that will explore the most extreme environments in the universe, and search for signs of new laws of physics and what composes the mysterious dark matter, explain how black holes accelerate immense jets of material to nearly light speed, and help crack the mysteries of the staggeringly powerful explosions known as gamma-ray bursts (GRBs)".

GLAST's specific mission priorities are: "To understand the mechanisms of particle acceleration in active galactic nuclei (AGNs), neutron stars, and supernova remnants (SNRs); to resolve the gamma-ray sky: characterize unidentified sources and diffuse emission; to determine the high-energy behavior of gamma-ray bursts and variable sources; and to probe dark matter and the early universe."

GRBs are thought to be produced when very massive stars go supernova, creating a black hole, or may be the evidence of a collision between two neutron stars. Their interest to science lies in the fact that they're "so bright that they could be detected as far back as the earliest five per cent of the universe's life time", as we noted back in 2004 at the launch of NASA's Swift - also tasked with detecting GRBs. Given that a star must collapse, or two stars must collide to produce one, their presence is conclusive proof of star formation which in turn offers an insight into "when stars began forming, and what the universe must have been like, billions of years ago".

GLAST differs from Swift in that while the latter "can rapidly and precisely determine the locations of GRBs and observe their afterglows at X-ray, ultraviolet, and optical wavelengths, the former will deliver "exquisite observations of the burst over the gamma-ray spectrum, giving scientists their first complete view of the total energy released in these extraordinary events".

To do this, GLAST boasts three main instruments: an anticoincidence detector ("a system on a gamma-ray observatory that triggers when it detects an incoming charged particle (cosmic ray) so that the telescope will not mistake it for a gamma ray"); calorimeter ("a detector that absorbs particles and photons, producing an electrical signal proportional to the total incident energy [which] can be used to measure a gamma ray’s energy"); and GLAST Burst Monitor (GBM) ("the instrument on GLAST that is specifically designed to detect gamma-ray bursts").

The telescope will orbit the Earth every 90 minutes, allowing it to map the entire sky roughly every three hours for what NASA expects will be a mission life of five years, and hopefully up to ten. The agency has a mission overview here (pdf), FAQ here and the main GLAST site is here. ®