Handlebars at dawn for RAF flyboy

An RAF pilot has won the right to sport his traditional handlebar whiskers while on a posting with a US squadron by citing Queen's regs at a tash-hostile American general, the Telegraph reports. 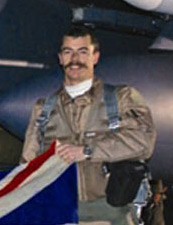 Flt Lt Chris Ball (pictured), who normally flies Tornado GR4s from RAF Lossiemouth, was seconded in February to fly F-15s with the American Air Force 366 Fighter Squadron in Afghanistan when his CO informed him that, since US flyboys "were only allowed to grow small moustaches", his facial hair had to go.

Ball responded to this affront to his RAF dignity by refusing, and then "consulted regulations approved by the Queen which set out the permitted size of an RAF moustache". He said: "The Yanks are not allowed to grow a full-length tash. After I was told to trim mine down I had to dig out the Queen's Regulations to prove I was not breaching our own code."

Said Regulations state that while a moustache should not extend below the edge of the mouth, they can be as wide as the bearer likes. Ball's handlebars extend an impressive six inches from tip-to-tip.

Following a frank "exchange of views", Ball's tash was spared the chop, the Telegraph agreeably notes. ®

If you absolutely must keep using those proprietary formats, walk this way
Applications19 Aug 2022 | 31