OpenSolaris still has some Linux copying to do

Given that OpenSolaris is largely aimed at developers we were surprised to find that GNOME isn't the only thing lagging a few revisions behind - OpenSolaris ships with Python 2.4.4, rather than the newer 2.5 and getting Ruby on Rails up and running is an entirely DIY experience.

The good news is that OpenSolaris has a new image packaging system, which works much like apt-get on Linux. Getting the latest version of your favorite tools is as easy as you're used to on Linux. Well, other than the fact that Sun's default repository often doesn't offer the latest versions.

The downside if you're coming from a Linux background is that OpenSolaris has very different locations for its various config tools. In short, it looks like GNOME, but it's definitely not Linux, and you'll need to adjust, which isn't a criticism, just a heads up.

In the end we were able to set up Ruby on Rails and Django development environments, as well as a the traditional LAMP environment, without any significant trouble (once we got a network connection up and running through VMWare).

OpenSolaris 2008.05 packs in most of what Linux users are likely to expect - GNOME, easy installation, good software update tools and more - and then adds some extras on top. Although OpenSolaris isn't quite ready for prime time, when it is, it'll be a nice possible alternative to Linux.

Because it ships with a number of developer-focused tools that most desktop users probably don't care about - the ZFS filesystem, DTrace, and "containers" - it may not be all that compelling for average users. 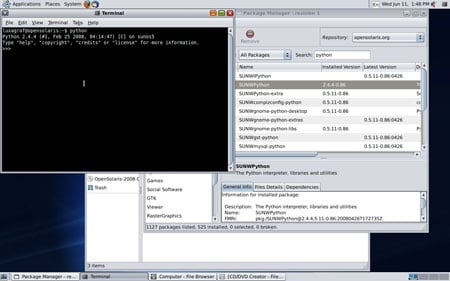 However, for those building web apps or handling network tasks like scaling web apps (can someone please send OpenSolaris to the Twitter scaling team), OpenSolaris offers a complete debugging toolkit that won't be found in most Linux distros.

While those currently running their development stack on Red Hat or perhaps Ubuntu Linux are definitely part of OpenSolaris' target audience, Sun is also chasing the latest trends, like hosted "cloud computing" platforms such as Amazon's EC2.

Amazon recently started offering the ability to run OpenSolaris applications on its EC2 servers. For the time being, Amazon's OpenSolaris support is limited to invitation-only clients, but Amazon plans to go public once the kinks are worked out.

As for which one is "the best" - that all depend on what you want to do. ®