Nintendo's Wii has once again outsold the combined total of PlayStation 3s and the Xbox 360s purchased in the US last month. 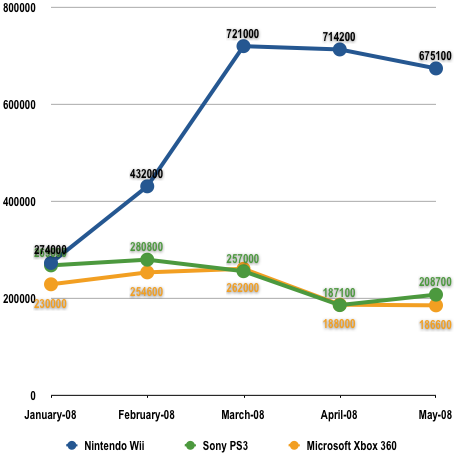 The Wii total was down slightly on the previous couple of months. In March, it hit a peak of 721,000 units, well below the Christmas surge - in December, Nintendo sold 1,350,000 Wiis, but nonetheless well up on its average across the rest of 2007.

Wii Fit has clearly done it work. Interestingly, in the US at least, the debut of Grand Theft Auto IV led to no similar sales surge for either the PS3 or the 360. The Microsoft console hit a post-Christmas peak of 262,000 units in March, while the PS3 rose to 280,800 in February, but neither marks a significant jump over previous or succeeding months.