A fascinating survey of music consumption conducted for British Music Rights has good and bad news for the beleaguered music business.

The bad news: online file sharing is more prevalent than other surveys suggest. The good news: a lot of people are willing to pay for a service that offers legal, licensed P2P file sharing. Half the people surveyed think distributors such as large telecomms companies should pay creators from the proceeds of such a license. And a surprisingly large number of people still value physical music goods, with two thirds of potential subscribers to legal P2P saying that they would continue to buy CDs.

Legal P2P services have been waiting in the wings for years, and telcos and ISPs are keen to offer innovative music sharing services that allow them to escape the fate of being in a low-margin commodity business. However, the biggest labels have feared that a service would cannibalise their physical sales; and without the ability to offer all music, telcos won't bite. The BMR survey may persuade rights holders to break the impasse.

74 per cent of people surveyed said they wanted a legal P2P service where they could "own" and keep the songs downloaded. The figure rose to 80 per cent amongst active P2P downloaders.

Enthusiasm was notably cooler when it came to paying for streaming music. 64 per cent were not interested in a file streaming service that didn't allow the punter to keep a permanent copy. 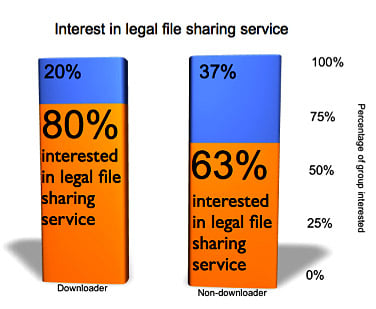 In the "digital age", people still love their music collections. 73 per cent value it as their most treasured possession - higher than their mobile phone and higher than any other prompted item, such as clothes, DVDs or books.

So why are CDs, which are filling the charity shops by the lorry load each day, still valued so highly? The most cited reason was simply the desire to own a physical hard copy of the music. Over 40 per cent said they like aspects of the CD packaging. Less than 10 per cent said it was because the CD had superior sound quality.

63 per cent acknowledge they "illegally" download unlicensed music - with the average monthly download being 53 tracks a month. 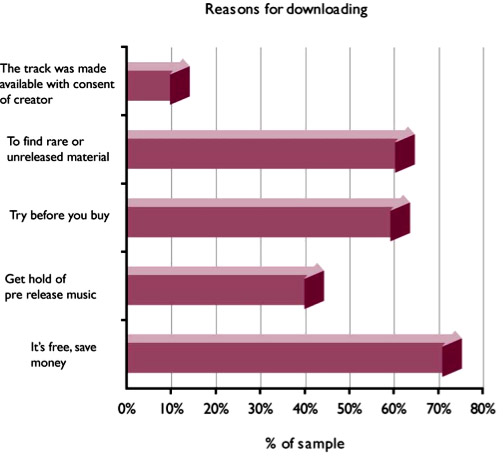 Altruism plays a large part, the survey discovered. More than two thirds said they were giving something back to the community. The reason that most frequently appears on website comments - that music is "too expensive" - was only cited by around 10 per cent of respondents.

"This suggests that respondents recognise the value in the ‘share-ability’ of music and are motivated by a sense of fairness and the principle of reciprocity – something for something illegally," BMR concludes.

Only 10 per cent of the population surveyed hasn't shared music one way or another. BMR discovered that making music available online is far more widespread - "a common activity for many respondents". 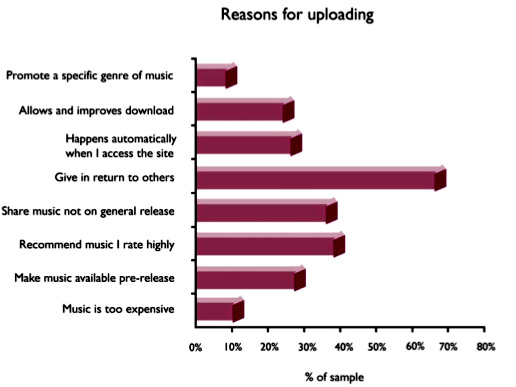 Next page: Big Lager profits most from live music
Page: