The average size of an MP3 collection is 1,770 tracks - of which 48 per cent have not been paid for. (BMR counts sideloading songs from a CD you've bought as "paid for"). There's a wide disparity across age groups. Not paying for music amongst the "pre work" demographics is much higher than the 25+ age group. Only 13 per cent of the MP3s in a collection of someone 25+ are not paid for, compared to 61 per cent for 14-17 and 50 per cent for age group 18-24.

Ripped CDs account for 14 per cent of the average CD collection of 150 CDs.

All of which suggests that while many people will sample MP3s to learn about new music, when they have the economic ability to pay for it, they will. So perhaps while the militant anti-copyright "freetards" make the most noise on the web, they aren't representative of the public at large.

Where does the music spending go, then, today?

Music remains a big spend for many people, with live music accounting for almost 60 per cent. Of the other 40 per cent, almost two thirds of the cash spent on recorded music goes on new CDs, 10 per cent on second hand physical music, and 26 per cent on digital downloads. But amongst the 14-17 group, digital downloads and subscriptions are much popular: with the spend on digital almost as high as on new physical CDs.

(It would have been interesting to find out how much is spent on music equipment such as iPods and accessories, but either BMR didn't ask, or asked but won't tell us). 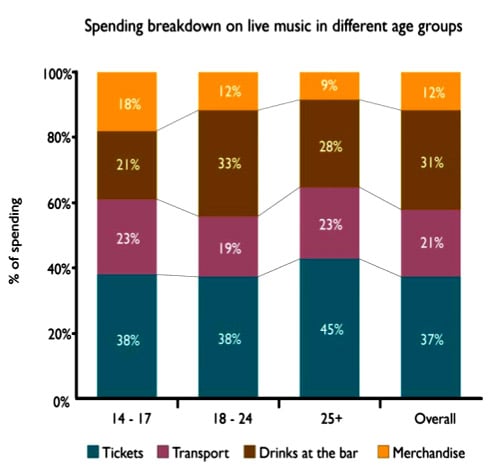 But note how so little of the cash spent on live music goes to the creators: only about a third is spent on tickets, and 12 per cent spent of merchandising: with the promoting clawing back much of that. Almost as much - a third - is spent on drinks, and a 21 per cent on transport.

The Freetard Factor: exaggerated after all?

As with any poll where voluntary expenditure is discussed, we must be aware of the "halo" phenomenon. People consistently tell pollsters they'll vote for higher taxes, but then act more rationally when they get to the voting booth. So the poll is a chance to polish one's halo, not tell the truth.

Nevertheless, BMR's survey will give much encouragement to those who see a viable commercial future for online music, if only certain forms of behaviour that today are "illegal" are instead licensed and monetized by the sound recordings business.

People value "keeping stuff" - that's clear. They also, surprisingly, value physical containers for music. Maybe if the recording industry can think up some nicer containers than the plastic CD jewel case they might be pleasantly surprised. But most of all, people want to share music and somehow find a way of rewarding the creators as they do so.

Apart from flops like Weedshare, and outside of closed subscription services such as Omnifone's MusicStation or eMusic, that's very hard to do. And even inside such services, it could be better: it was much nicer to chat, recommend and share music with the original Napster than it is today.

But perhaps the biggest losers in the survey are the anti-copyright crusaders. Some people - including tenured "Professors" and bloggers - have earned a nice living from railing against the evils of paying creators. In recent years, a mini-branch of academia has sprung up to examine copyright reform in the "digital era" - although their answer is a foregone conclusion: their copyright "reform" invariably makes creators worse off than before.

As we've seen recently, the shrieks for copyright reform are now coming from the ailing Web 2.0 sector. Most of these Noddy outfits have no hope of making a success of their businesses, so they need to cut creators out of the loop to lower their "supply" costs.

The survey gives a powerful impetus to people who believe that copyright reform can mean more choice for music lovers without making artists poorer or spelling the end of the world for the old music business.

British Music Rights - a counterweight to the BPI that represents songwriters and composers - surveyed 773 people aged 14 and above. You can read our interview with BMR's Feargal Sharkey here. ®