With marketing soundbites from Lead Balloon™

A company in Colorado says it will build a miraculous flying robot Humvee, able to hover in midair or zoom along at up to 450 mph. The "Hummer of the Sky™" could be used to resupply US troops with ammo, food etc during battles - or, naturally, it could be tooled up with an array of deadly weaponry and join in itself.

The V-STAR (VTOL Swift Tactical Aerial Resource) is that old favourite among flying-car fanciers, a ducted fan vehicle. In this case, a fairly conventional saucer-like turboshaft powered fan airframe has a few new bells and whistles added: a separate tail fan for high speed, and a diamond-shaped box wing for efficient lift at speed. The designers also hope to drastically improve fuel efficiency using a proprietary "recuperator" to harvest waste heat from the turbine exhausts and put it back into the engine at the intake.

Unusually, the flying Hummer's payload bay is situated inside the central hub of the hover fans. This is intended to benefit the craft's stability. The box wing also has pop-out winglets for better lift at low speeds. 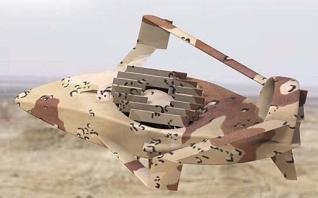 It can really fly - in PowerPoint land.

The V-STAR's promoters, Frontline Aerospace of Broomfield, Colorado, hope to have a half-scale demonstrator flying next year. The designs were exhibited to the world at a robot-planes expo in San Diego last week, as the company seeks partners for the production of a full-size V-STAR.

"V-STAR is the HUMVEE of the air," said Frontline CEO Ryan Wood. "It can reach targets often three times faster than helicopters ... Our patent pending configuration creates for the first time a cost-effective and practical morphing wing."

Other than nifty design documents, however, Frontline doesn't seem to have much to back up its claims. However, Wood did tell Flight International that the firm had done "wind-tunnel tests".

Overall, the V-STAR at least looks a bit more practical than some infamous ducted-fan designs. Frontline have done at least enough sums to know that a large disc area is vital for any sort of efficiency (that's why helicopters work and so far ducted fans mostly don't - their rotors give them a nice big thrust disc). But building a car-sized fancraft would seem difficult enough, without then adding morphing wings, recuperators and unmanned operation. (That said, the unmanned part would seem to be essential: otherwise the pilot would take up most of the 180kg payload.)

In general, most analysts seem sceptical about the V-STAR concept. We'll probably be waiting a while yet for our flying gas guzzlers.

And sure, the US military do use Humvees to resupply their troops. But even so, calling your new product "the Hummer of the air" just now doesn't seem like the savviest piece of marketing ever. ®