US defence secretary Robert Gates has ordered further reinforcements for America's aerial killer robot flotillas patrolling the skies of Southwest Asia, according to reports. Gates' freedom to assign the extra drones is widely being seen as following on from his recent firing of top US Air Force chiefs, possibly inclined to drag their feet on the deployment of unmanned aircraft to support troops on the ground.

Aviation Week reports that the USAF has now been directed to put a further six Predator and one Reaper "orbits" into operation within the US Central Command area of responsibility, covering the Iraq and Afghanistan warzones. An orbit, or standing combat air patrol, means an aircraft constantly in the sky. Maintaining this in the case of the Predator and Reaper requires four robo-planes per orbit, but this isn't the problem. The USAF reportedly won't need to buy any new hardware. 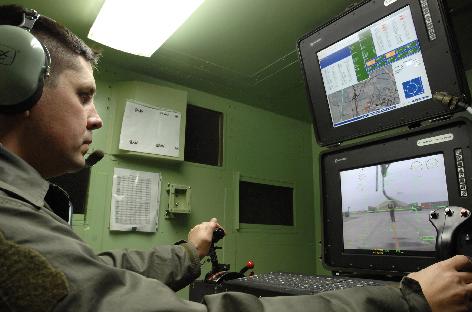 The problem is manpower, as current Predators and Reapers both require constant piloting while in the air. During take off and landing this is handled by pilots who are physically present at the airfield in question, to minimise latency lag, but normal operations are controlled from the USA via satcomms.

Operating Predators remotely is considered one of the most unpleasant duties in the whole US air force, despite the huge popularity of the aircraft with embattled troops on the ground. A recent study said that Air Force drone jockeys based near Las Vegas were suffering "chronic burnout" not to mention "significantly increased fatigue, emotional exhaustion" and even "impaired domestic relationships".

Some of this at least may due to the fact that the drone squadrons work many more hours on the stick than ordinary air crews, owing to the huge amounts of time their aircraft spend in the air compared to manned ones.

The USAF might not find it impossibly difficult to expand its ranks of non-commissioned sensor operators, solving at least some of its man-hour issues. But at present the air force insists that the pilot seats in the ground stations are filled by fully qualified aviators with meatspace flight time. Institutional resistance on the part of the wings-on-chest community to becoming ground-bound drone drivers has made this a difficult policy to man up, so much so that Gates previously described the process of expanding drone operations as "like pulling teeth". It would certainly be a strange jet jockey who didn't feel he'd lost some of his identity as a real fighting man, a front line combatant, with a switch to duty at Las Vegas or inside the wire in theatre.

The US Army has a different plan. Its new Predator variant, the "Sky Warrior", is to use automated takeoff and landing, and would be operated on the job by non-aircrew tech specialists. These plans are also facing strong objections from the pilot community. Following a recent failed attempt by the USAF to seize control of all serious unmanned air operations, however, these objections seem likely to be overruled in the case of Sky Warrior.

This rather schizophrenic attitude to unmanned aircraft on the part of pilot-dominated organisations may offer a clue as to why the technology has taken so long to develop. The recent firing of air force bosses Wynne and Moseley, at least, would appear the have loosened the grip of the military aircrew unions somewhat.