OpenSUSE 11 a redemptive OS with a Mactastic shine

For newbies and Linux dark-lords

Among the potential gotchas for new users is the lack of readily available NVIDIA drivers. Ubuntu and others have made it relatively easy to grab non-free drivers from their default installs, and we were somewhat surprised to find that OpenSUSE skipped on what's become (for better or worse) a fairly common hardware driver solution.

The other problem we had was with the Zypper update utility. Zypper is new and reportedly features significant speed and stability improvements. In fact, early rave reviews about Zypper had us looking forward to testing OpenSUSE. For the command line junkies there's also a "zypper" utility which offers something very similar to yum on Fedora or apt-get in Ubuntu/Debian.

Unfortunately, in the release candidate we tested, Zypper wasn't working quite right. It would find packages that had available upgrades, but for some reason would never actually apply the updates. After a bit of digging we discovered that the issue is a known bug (and it's listed as a blocker in OpenSUSE's bug tracker), so it should be fixed by the final release.

While Zypper had a few pre-release quirks, the YaST panel was everything it's cracked up to be. When Linux users tout the customization options of the platform, they often forget that new users may find the number of options scattered and daunting.

That's where YaST comes in. YaST stands for Your awesome Setup Tool (Or the less inspiring Yet Another Setup Tool - Ed), and it is indeed quite awesome. YaST is by far the simplest way to navigate through the confusion of configuration panels, installing, theming and customizing to your heart's delight. 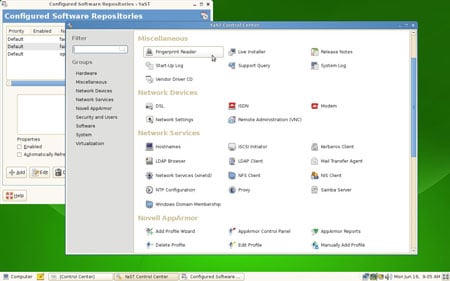 Also worth mentioning is that the kitchen-sink-DVD option of OpenSUSE includes VMware's openvmtools, which means that setting up VMware Player is a snap. Including the tools by default is a nice touch and will no doubt be appreciated by heavy virtual machine users, who have wrestled with VMware installs on various distros. Of course, if VirtualBox is more your bag, you'll have to set that up yourself.

Overall OpenSUSE 11 is a nice evolution in the SUSE line, building on the features in 10.3, but also making the distro more approachable for Linux newbies without withholding power user tools.

The DVD distro in particular offers just about all the options one could ask for and manages to make the installation process every bit as simple and elegant as a closed source system like Mac OS X, which is no small feat.

Provided the name Novell doesn't send you running for the free software hills, OpenSUSE 11 is an easy-to-use distro and worth a closer look. ®